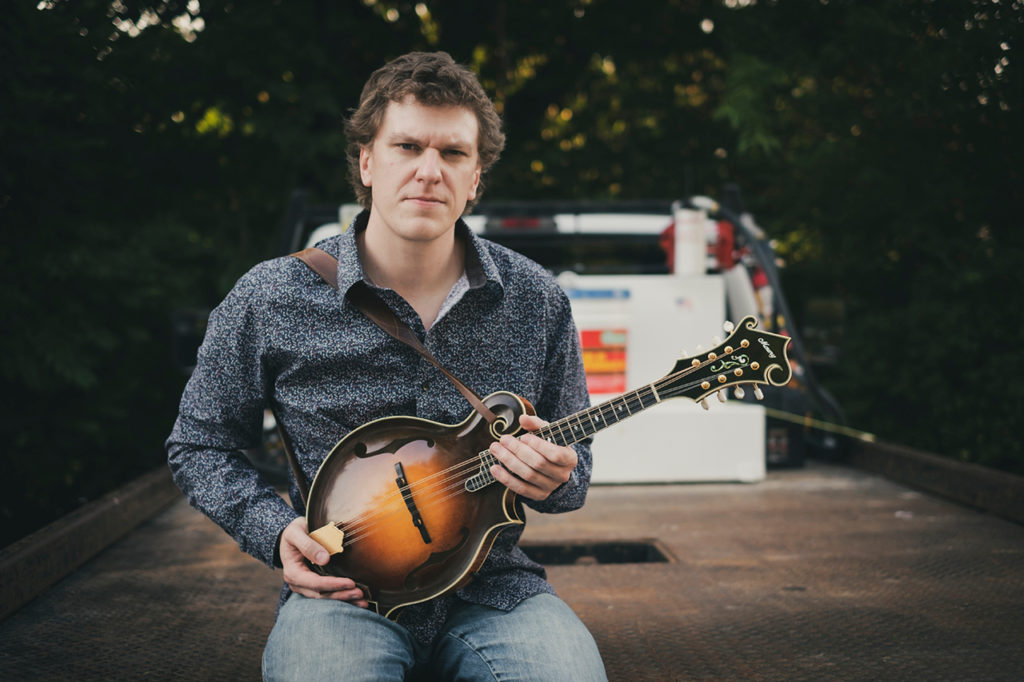 James Kee works. And I don’t mean ‘kinda.’ His labors have resulted in opportunities that the entire East Nashville music community has benefited from. Through his band East Nash Grass he’s employed some of Nashville’s finest musicians and created an impressive following with their weekly performances at Madison TN’s Dee’s Country Cocktail Lounge. He and fellow musician Evan Winsor joined forces in 2018 to create Bluegrass Wednesday Nights at the East Nashville Post 82 American Legion. This event has hosted the likes of Jimmy Stewart, Jenni Lyn, Kyle Tuttle, Daniel Amick, Steve Huber, Dave Talbot, Kurt Stephenson, Jake Workman, David Grier, Cristina Vane, Hillary Klug, David Peterson, Nate Leath, Brad Benge, Ivy Phillips, Sierra Ferrell, The Revelers, Rhonda Vincent, and Chris Scruggs, just to name a few. In addition to all that he does to support other musicians, he’s a fantastic mandolinist and vocalist in his own right. James I’m glad to have you with me today. For those that haven’t met you, tell us who you are, what you do, and where you’re located.

I grew up in Signal Mountain, TN. I began singing at an early age in church, school, and local choirs; my grandfather played banjo and guitar and introduced me to Bluegrass at an event called the Mountain Opry in 1997 and it quickly became my favorite music.

JED: How old were you when your grandpa introduced you to bluegrass?

JED: Can you tell me a little bit more about The Mountain Opry? I’ve never heard of it.

It’s a free bluegrass show on Signal Mountain, every Friday 8-11 at the Old Walden’s Ridge Civic Center. It was a hot spot for music growing up and it’s still happening but most of the people that founded it and its attendees like my grandfather have passed on.

These albums represent nostalgia, which to me is the most impactful feeling music conveys. I could understand this feeling before I ever understood heartbreak, loss, or any of the other emotions music can evoke. I love that each album plays like a live stage show with each track in proper sequence to carry the listener through a variety of moods and tempos as well as subject matter. I enjoyed the Texas swing influence in “Killin’ Time” before I understood what I was hearing. I loved the 3-part harmonies of “Letter to Home,” “So Long So Wrong,” and “Model Church” before I understood the intricacies of harmony singing. I just knew I liked the sound of what I was hearing, even though “So Long So Wrong” was far more sophisticated than my musical comprehension. “Smoke Rings in the Dark” may be considered an outlier in this list but I regard it as an early exposure to a clean and developed Nashville sound that featured pedal steel and clean instrumentation that I could comprehend. I had just began playing guitar when this album came out in 1999 and it was like hearing a world of new tones mixed with excellent songwriting, including cuts penned by Bluegrasser Harley Allen. “Letter to Home” is likely my favorite IIIrd Tyme Out album because I relate the sentiment attached to the family farm and rural upbringing which is a dying part of Americana that has been, and is still present in my family’s heritage. I acquired these albums early in my musical journey, “Killin’ Time” being the first cassette I ever owned when I snatched it from the family’s Ford Taurus station wagon.

JED: Ha! That last sentence really paints a picture of a different time.

We soon upgraded to a ‘95 Ford Windstar mini-van with a CD player so the cassettes were obsolete. Was probably a good move though because my parents bought the Beatles’ collection on CD and it was some of the only music on which all 3 of us kids could agree. That and the Beach Boys “Endless Summer” which is currently stuck in my tractor’s CD player.

JED: Hahaha! That is great. That AKUS album has been referenced in this question so many times since we started doing these interviews. I need to tally up an official count, but I wanna say at least 15 times.

Wow that’s awesome. It was a game changer and won 3 Grammys. My siblings could tolerate it more than some of the trad-grass stuff I listened to.

JED: I didn’t know it had won 3 Grammys, but I’m totally not surprised. Which part of your music career do you enjoy the most – live performance, recording, writing, etc.?

When I was younger live performance was my focus because I enjoy traveling and felt an urge to explore. I still love traveling but have ventured enough to appreciate being a native Tennessean. Since moving to Nashville a couple years ago being around town is a real joy with memorable musical experiences as a listener and player occurring on a weekly basis. I’ve never encountered a more exciting musical place than Nashville. I regard recording and writing as the most important aspects of my musical career because of the lasting legacy they both can have. They are merely a reflection of where I am at that point in my musical journey but no matter how I change as a musician the records and songs will remain.

As a mandolin player, Wayne Benson is my biggest influence and I believe his fame could exist outside the Bluegrass market. I could say the same about his bandmate Russell Moore, who is my favorite singer. I also think my friend David Grier deserves more notoriety for his incredible flatpicking and songwriting abilities.

Currently I play a 2002 Flatiron Festival F mandolin built by Gibson in Nashville. I also have a 2001 Santa Cruz Vintage Artist guitar and I use both these with K&K pickups and a Grace Design preamp. I play on a microphone when the venue acoustics allow but usually the direct line is the easiest way to operate.

JED: You are the first guy I saw use a Grace preamp. I remember rolling my eyes when I showed up to my first East Nash Grass gig and saw you plugging in your mandolin. I though “oh great – this is gonna sound like garbage.” Two songs in and I was sold – that BiX paired with your K&K made it sound fantastic. I ended up purchasing a BiX not too terribly long after.

It doesn’t sound as good as a mic but in a noisy setting or a large stage there’s no other way to get volume. What good is tone if it can’t be heard?

JED: Preach man. If you were given an unlimited budget for an album production to record your dream album, what would it look like?

A dream budget would be nice but money couldn’t buy songs that I feel would be necessary to truly make a dream project.

I don’t know when the stars will align for an event like that to happen but I don’t feel far enough along on my young musical journey to be ready for a masterpiece or “career-defining” album. When amazing and impactful material is involved, the musicality comes together naturally.

JED: That is so observant man! I have never had anyone point to the fact that the material really has to be the origin of whatever greatness emerges from a session. What is your favorite album or recording that you’ve made to date?

Kati Penn & Newtown’s self-titled debut album released in 2010. We collaborated together to produce this album and worked for years prior to recording to get where we were ready to record something. As a band our musical influences were very diverse and this made the entire process exciting and brought out music we couldn’t have achieved individually. I can hardly recognize my own voice and playing almost a decade later but I’m glad we were able to document our time together.

I’m actively promoting Bluegrass Wednesday Nights at the American Legion Post 82. I’m privileged to host an event that puts me in direct contact with many of the most talented Bluegrass musicians. We started a little over a year ago and I believe the event has found favor among musicians because Nashville is growing so rapidly that it’s in danger of losing the culture that defined the city. Our event is for the music, not money. I’m also working with East Nash Grass to record an album with many original songs we’re hoping to complete before the spring.

JED: For those that are unfamiliar, can you tell us a little more about Bluegrass Wednesday Nights?

BGW is every Wednesday, 8 pm CST at the famed East Nashville venue the American Legion Post 82. We have an open jam and stage show each week featuring a variety of great Bluegrass bands. We’re glad to be working with the great folks at the Legion and have some exciting things on the horizon for 2020.

JED: Well James I really appreciate you taking the time to talk a little bit about your story and tell us what is going on in your world. Thanks for doing all you do to give musicians an outlet at Bluegrass Wednesday. Stop in and say ‘hey’ again soon!