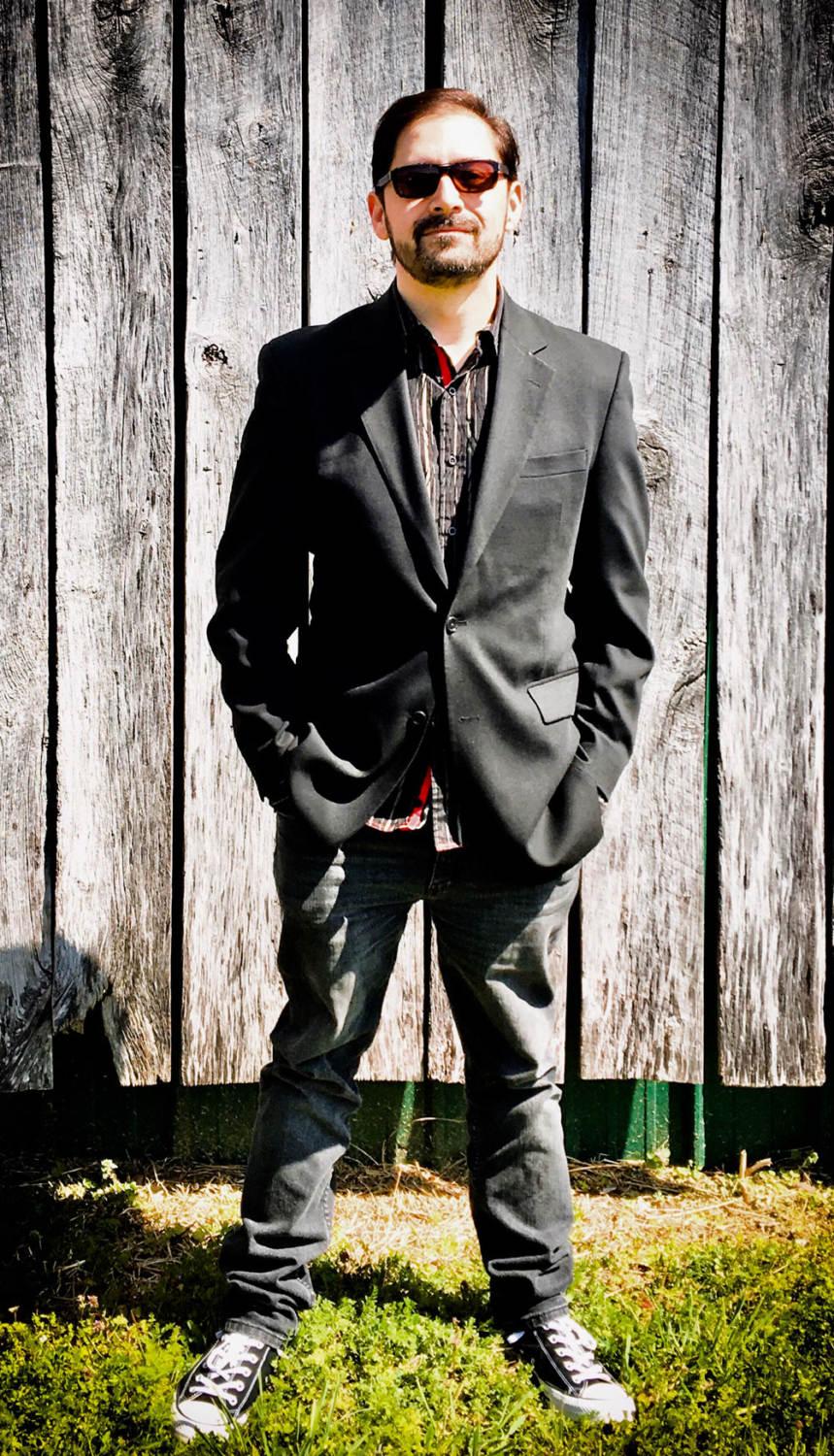 Today Acousticult is talking to Brad Benge, producer, engineer, vocalist, and multi-instrumentalist living in Nashville. Brad, tell us a little bit about your beginnings. Your origin story, so to speak. How did you get into music, and what made you choose this path over others?

I was born in Tulsa, Oklahoma and grew up in a small town called Sallisaw. Began playing rhythm bass/chords on the piano at age 2. I was an only child, and I spent a lot of time listening to my parent’s record collection, including bluegrass, country, and folk. I was fascinated at an early age with sound and electronics. Tinkered with tape recorders and speakers long before I ever committed to a stringed instrument. Began playing electric bass in high school, and was in several bands. Abandoned bluegrass music entirely in my teens, and listened more to 80’s country and indie/prog rock. Got my first studio intern job in Fort Smith, Arkansas.

ACOUSTICULT: How did you end up in Fort Smith? Who were you interning with?

I didn’t live in Fort Smith…but grew up in Sallisaw, Oklahoma which was about 20 minutes from Fort Smith. That was my first job out of high school. I interned at Omega Sound. There I heard Alison Krauss’ ‘So Long So Wrong’ album. The studio was trying to produce an accompaniment track for ‘Find My Way Back To My Heart’…but the hired background singers could not reproduce the harmony vocals. I stayed late one night, and sang them myself sitting at the console. The next day, the engineer said they were good and they would use them. That’s when I started listening to bluegrass again. I bought that album, and got out my parents old records again. I moved to Oklahoma City to pursue a career in audio engineering and music recording.

ACOUSTICULT: What led you to leave Fort Smith? Who convinced you to move to OKC?

I moved to Oklahoma City for a job opportunity at Cornerstone Recording. Ken Sarkey hired me and gave me some startup money to make the move. Worked in several commercial studios there for about 10 years. Two months after I purchased my first acoustic guitar, I was hired to play guitar in the Byron Berline Band. Spent four years with them. I was also dabbling with the upright bass in jam sessions (wherever there was one I could play). I would mostly listen to professional bass players though, and for many years was too timid to get into the jams. After I purchased a bass and started playing more regular, I formed a band with local fiddler, Kyle Dillingham, called ‘Horseshoe Road’. We developed a pretty good local following, and did several international tours with academic cultural exchange programs. We won some awards, played lots of shows, and had many great opportunities. Kyle and Horseshoe Road are still having international success, and recently played their first spot on the Grand Ole Opry in Nashville.

I was running sound in Winfield, KS where I met Tommy Emmanuel, and became his biggest fan. He liked how I ran sound, so after a few local shows, I was hired to travel with him full time. Again…did that for about four years. It was amazing in every way, and I got to see 32 countries with him. Tommy remains one of my favorite people to work and spend time with.

The reason I came to Nashville, was because there was a lot going on with Tommy in the studio, and I felt like I was missing out big time. We both agreed that I needed to be there. So Tommy generously offered to sell us his home, and move us in months before we closed on the house. We made the move two weeks after the Nashville flood of 2010.

ACOUSTICULT: Was the house you moved into affected by the 2010 flood?

Our house was not affected by the flood.

ACOUSTICULT: That is good fortune man.

I spent several years working from a home studio, doing recording, mixing, mastering, and background vocals. Also working as a ‘sideman’ musician with many bluegrass/country groups, including five years with Chris Henry and the Hardcore Grass and two years touring with the 90’s super group, Shenandoah.

I currently work independently on projects, and pretty much stay equipped to do most any capacity of work. The majority of what I do is still recording projects and upright bass. However I sometimes will play gigs/sessions on drums, guitar, keyboard, or as a background vocalist. I have also been known to dabble in various video related endeavors.

My entire ability is based on my musical ear, which I knew I had at a very early age. I learned that if you do what is appropriate and supportive to others, it doesn’t matter how flashy, impressive, or fast you play. So I stuck with it because it seemed to work for me. I don’t consider myself highly virtuosic, but perhaps more seasoned and adaptive than most. I certainly try to remain humble, and not operate on ego. I believe that is key in a music town like Nashville. Just try to enjoy the abundance of musical genius around me, and understand that I am very lucky/blessed to be a part of it and turn a buck. It’s a pretty fulfilling life in general.

My five most influential albums are…

I listened to this on my grandma’s console stereo at a very early age. It’s the first recorded sound I remember hearing as a child. For the most part, it contains a hodgepodge of early recordings from the 40’s, that were later “dressed up” using some of my favorite Nashville studio musicians in the 60s….and remains a fun and nostalgic listening experience for me.

Alison Krauss “So Long So Wrong”

The only modern “mash” bluegrass album I truly love. It’s pretty near and dear to me, and highly influential in my return to bluegrass. I think a lot of musicians can relate. Barry Bales was a big influence.

This album represents a turning point and the beginning of my friendship with Tommy. There was even a time when I could perform the title track on solo guitar (very poorly).

John Hartford “Nobody Knows What You Do”

Flatt and Scruggs “The Versatile Flatt And Scruggs”

My favorite 60’s Flatt and Scruggs studio cuts. Cousin Jake Tullock’s bass and high baritone is superb. Still trying to emulate his playing. Not a chance with his voice.

I’d say I enjoy all parts of my career path equally, although I am not much of a writer or front man.

Three underrated current musicians or groups I would say are…David Grier, Aubrey Shamel, and a group called Bill And The Belles. They should all be world famous IMO.

My $100,000 project would start of with the completion of my own studio space. Then whatever was left over, I’d use to hire my friends and heroes to play on it. Maybe record some favorite, yet forgotten traditional bluegrass/country songs. Then add weird stuff like synthy pads, earthy loops, and steel guitar. (Then probably remove the first two things because they didn’t work like I wanted them to.)

My favorite recording project I’ve done so far would be the last album by Tommy Emmanuel titled “Accomplice”. It has a guest list of people I never thought I would be in the studio with. It also spent 17 weeks at #1 nationally on the Billboard bluegrass charts, which was a career high point for me.

I just completed another album with Tommy. It’s a remake of 27 of his most famous solo guitar songs. Also recently completed albums by Zach Top and Modern Tradition, and High Fidelity. Currently working on my life in general, getting in shape, mental and physical wellness, staying in practice on guitar and bass, and preparing for the next chapter. There are currently recording projects on the horizon from Tommy Emmanuel, High Fidelity, and possibly Jarrod Walker.

Thanks Jed for including me on your new endeavor.

ACOUSTICULT: Absolutely man – thank you for chatting with us!