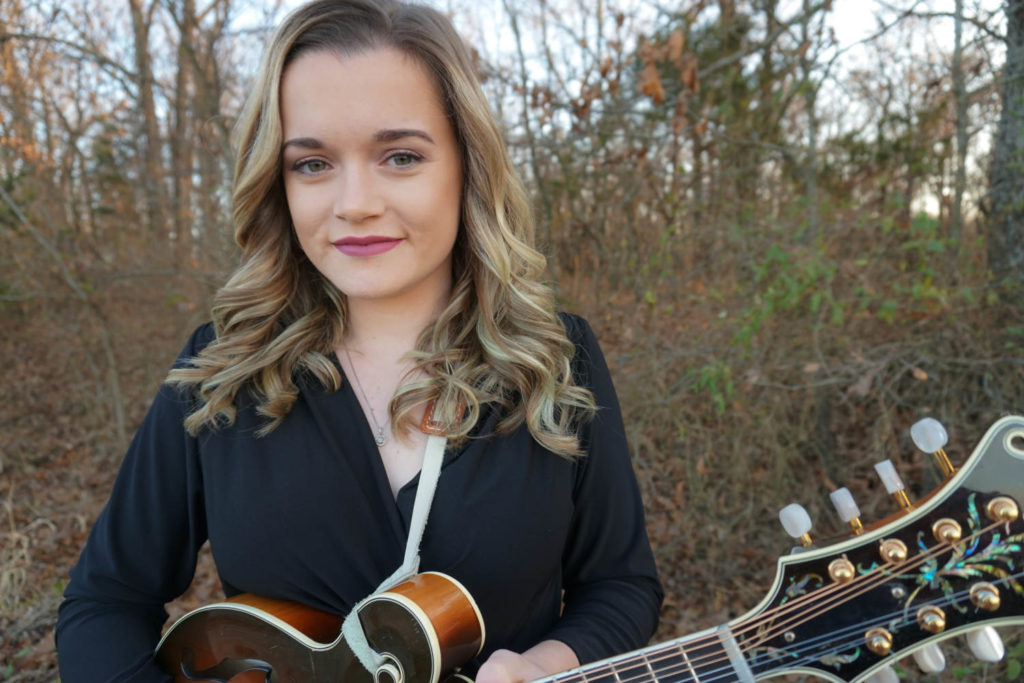 I’ve always been impressed by people who are able to pursue some form of music career while simultaneously going to college or working another job. Our guest today is quite the achiever; she not only attends college full time, but is also a professional shooter AND fronts her own bluegrass band. Cheyenne, if you don’t mind, tell the folks at home who you are, what you do, and where you’re located.

My name is Cheyenne Dalton, and I’m from way out in the country in southwest Missouri. I play the mandolin and sing lead in my band, That Dalton Gang.

JED: Tell us a little bit about your story. How did you get started playing music?

I started playing classical violin when I was four years old, and then when I was about 10, I decided that I wanted to try something new. Everyone in classical music seemed so uptight and they never smiled. I thought music should be something that caused visible joy to the audience and the performer. So, I started playing fiddle music and traveled around the U.S. competing in fiddle contests. I then started the band, and eventually switched over to the mandolin.

I first heard bluegrass music when I was very young at Silver Dollar City. We would walk into the park and there would always be a top notch band playing at the gazebo stage. Bluegrass looked like so much fun! The people on stage always seemed to be having the best time, and I wanted to be a part of that. I switched to the mandolin because my little sister also played violin at the time, and it was easier for me to learn a new instrument, as she was newer to the violin than I had been.

I’m a huge Alison Krauss and Union Station fan, and while I love all of their albums, I narrowed it down to New Favorite, and Lonely Runs Both Ways. We do several Alison songs, and she always blows me away with her instrumental and vocal abilities.

I also love the Volume Five album,Voices. It is both equally beautiful and mash!

To round out my list, I wanted to include It’s Just a Road from The Boxcars, and the self titled Carrie Hassler and Hard Rain album!

I personally enjoy the live performances the most. The feeling of being on stage and being in front of an audience is incredible. When the audience enjoys your music it only makes you play better.

I love The Purple Hulls. They are so talented!

I also think that Casey Freeland from Casey and the Atta Boys is such a solid bass player, vocalist, and band leader.

Lastly, I wanted to include Nate Burie. I am so happy to see the success he has been having as of late, because he deserves all the recognition he can get.

JED: The Clark sisters are fantastic. I was glad to see fellow Arkansan Abby Hartley start playing bass with them last year. Casey is also an Arkie! Yes I was excited to see Nate get the mandolin spot with Special Consensus after Nick decided to come off the road. I am really glad for him. Tell us a little bit about your current rig – what does your “rig” consist of? What instrument(s) do you play, pedals, mics, etc.?

JED: No pedals or DIs for you?

No. We are sticking to the more traditional side of things for now. We also find it easiest since we don’t have a traveling sound guy, and it’s one less thing to forget while packing!

My ideal album would have the band as it is now, plus Trustin Baker playing fiddle, and Jacob Metz playing dobro. I would love to record at Mountain Fever Records, with Aaron Ramsey producing.

Yes, I have that’s an incredible album. It has such a full sound.

JED: Yes it is a sonic masterpiece. What is your favorite album or recording that you’ve made to date?

My favorite album so far is our most recent one, simply self-titled, That Dalton Gang. It most accurately represents where we are as a band right now.

JED: Where did you record that album? Did you have any special guests on it?

We recorded it in Springfield, MO at Studio 2100. Jeff Smith owns the studio, and he does a fantastic job producing music of all genres. We don’t have any special guests on any of our albums. For now, when we record an album, we choose to record the band as it is, so it most accurately represents where we are as a band, at a certain moment in time.

I personally am just working on my playing and vocal abilities. As for the band, we are always working on building our repertoire, and we would really like to get into the songwriting aspect of things. We have many shows booked for 2020.

JED: I caught a few tunes from your set at IBMA 2018 and I remember you really killed Carrie Hassler’s “Goin’ On The Next Train.” Do you have a vocal routine or coach / teacher that you work with for your voice?

I have never taken any real vocal lessons. I would love to find someone to help me grow and develop my voice, but the people that I have tried to go to in the past have always tried to mold me into a classical singer. Although some of their advice is valid, such as proper breathing techniques, the advice they give about phrasing, pronunciation, and enunciation are clearly not the same for classical versus bluegrass singing. They were trying to mold my voice into something that it’s not.

JED: I can attest to the frustration of vocal coach not “getting” what you’re trying to achieve. It is tough to find someone, especially within the bluegrass music community, that can help you develop YOUR own sound. Well Cheyenne I’ve had a blast getting to chat with you and hope you’ll stop in and say “hi” again soon 🙂

My pleasure! Thanks for having me!

Keep up with Cheyenne and her band That Dalton Gang on their Instagram & website. All photos by Terry Dalton.