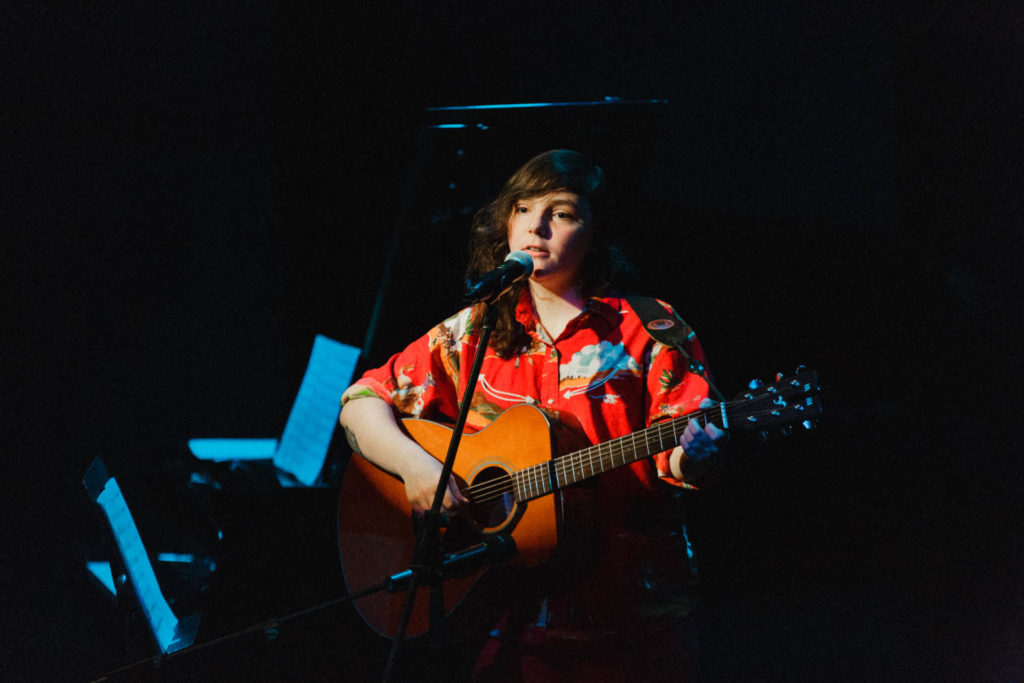 Kasia is a Canadian folk/rock musician based out of Saskatoon, Saskatchewan joining us today to talk about her music. Tell us a bit about yourself, Kasia!

I started music early on with piano and trumpet lessons. My mother was a piano teacher at 16 so I like to believe I gained my talent and interest in music from her. After years of classical music, I discovered bluegrass and started learning guitar and mandolin when I was 13 years old. I owe Max Heineman (The Foggy Hogtown Boys, Lonesome Ace Stringband) credit for fostering my interest in bluegrass. His high lonesome vocals are what ensnared me. Upon hearing his band perform,  a whole new world of music showed itself to me and I knew I had found what I needed. After growing tired of performing alone and yearning to replicate pretty much any sound Max made, I pinned down a banjo player (Jaxon Lalonde) and a fellow singer and created a bluegrass inspired trio named In With the Old. Together we created two albums and toured across Canada and the United States, playing large festivals such as Merlefest, Winnipeg Folk Festival, and Ness Creek Festival. We were teenagers, so naturally our musical tastes grew beyond Bluegrass and we started playing psychedelic folk. After 5 years together, we went our separate ways and I have been working on a solo project for the last two years. I used to write a lot of fictional story songs, but nowadays I prefer to take personal real life tragedies and create sarcastic witty songs with simple lyrics. I also love genre hopping and created a solo E.P. (yet to be released) which bounces between different acoustic stylings such as Ragtime, Piedmont fingerpicking, Folk, Swing, Latin influence, and a Rock ballad.

ACOUSTICULT: What are some of your favorite albums, and how have they influenced your own music?

My 5 favorite albums lately (in no particular order) are The Allman Brothers Band (self titled), Both of the Dean Ween albums (and all Ween albums for that matter), Quebec by Ween, Another One by Mac Demarco, and Poor Mic’s Toe by Micah Erenberg. Ween birthed my love for rock and roll and I have learned a great chunk of their discography. Ween is my main music writing influence these days. At one point in my research, I discovered Ween’s guitar player Dean Ween (Mickey Melchiondo) is largely influenced by Dickey Betts, the guitar player of the Allman brothers. I then discovered Betts was a Mandolin player before he learned guitar, so I naturally understood his licks as they derive from Mandolin influences! My main lyrical inspiration is a fellow Canadian and a great pal, Micah Erenberg. His songwriting presents itself to you the way a thought in your brain would. I learned that a lyric does not need to be coded or full of metaphors for it to be pleasing to the ear. As for my general influence, I love listening to music from all genres and I truly believe there is a genre for every mood! For me, having an open interest in all sounds helps me be creatively diverse and opens many doors for songwriting.

ACOUSTICULT: What part of music is your favorite: touring, performance, songwriting, recording?

My Favorite parts of being a musician are touring and meeting people. I’m a very outgoing person and love talking to strangers, no matter how much my mother told me not to. Everyone leads such different lives, and it’s fun to get a peak into different cultures while on the road. I also enjoy meeting artists and watching their sets! We all do this music thing a little differently, so meeting people to collaborate with gets me excited and refreshes my creative side.

ACOUSTICULT: Do you have three or four musicians you think are underrated in today’s scene?

ACOUSTICULT: Tell us a little bit about your rig. What are you playing right now?

My current rig isn’t too big or expensive. I currently play a Yamaha FS800 that I picked up in British Columbia for $300. It has no input so sound guys hate me, but it is the loudest acoustic guitar you’ll ever play. When I picked it up, I was genuinely afraid to look at the price and couldn’t believe my eyes when I saw! It truly is a unique guitar. Although I do love it, I am currently shopping for a new electric rig. My electric guitar is Epiphone Les Paul Junior that just crapped out on me. Other than that, I’m borrowing my boyfriends setup right now which consists of a Fender Hot Rod Deluxe III and a pedal board which consists of distortion, phaser, echo, tremolo, and compression. I’m still researching which sounds I like the most, but this setup is making me happy for the time being.

ACOUSTICULT: If you were given $100,000 to spend on an album production, what would you do with it?

If I was given $100,000 for album production, I would buy some electric gear, get a band together, and put out a rock and roll based genre hopping album in Ween style. I prefer lo-fi so I wouldn’t spend too much on post production. I would use the rest for marketing (hire a publicist). Maybe get a haircut and a tour van. I would record it right here in Saskatoon with Barrett Ross at Ghetto Box Studios. He has recorded many great local acts and always pulls out an amazing sound. My dream is to have Ween play the music on it with me and to help me write some of the songs but that just seems unrealistic. In real life, I would have Jaxon Lalonde and Ryan Shotton on it again, as well as local drummer Cordell Anderson.

ACOUSTICULT: What’s the favorite album that you’ve worked on, personally?

My favorite album I’ve worked on would have to be the new one I have coming out. It’s my first solo album and it feels incredible to have something I created all on my own. It’s only 6 tracks, but they are all written and composed by me. It was recorded by Ryan Shotton who is member of Rugged Little Thing, and Jaxon Lalonde (my past bandmate from In With the Old) added bass tracks to the songs. The sound is so crystal clear, it sounds like I am sitting in your living room with you. It’s perfect for a rainy day, car ride, supper, you name it. I feel so proud to have an album I’ve created from start to finish on my own.

ACOUSTICULT: So what’s next in store for you?

I recently won a youth songwriter contest in Canada where I was chosen among five winners to receive a cash prize and a trip to Toronto to meet SOCAN professionals and representatives from Sirius XM. I have plans in motion to get my EP out, get touring, and replace my current acoustic gear with some electric gear (thinking a Fender strat and a vintage Fender amp). My idea is to tour on my folk project and get an electric band together so I can Bob Dylan everybody with a brand new rock album sometime in early 2021 (If you’re unfamiliar, Bob Dylan switched from folk to electric folk, enraging many fans). My career goal is to be the female Dean Ween.

ACOUSTICULT: Thanks so much, Kasia, for sharing what’s going on with you in the music world right now.