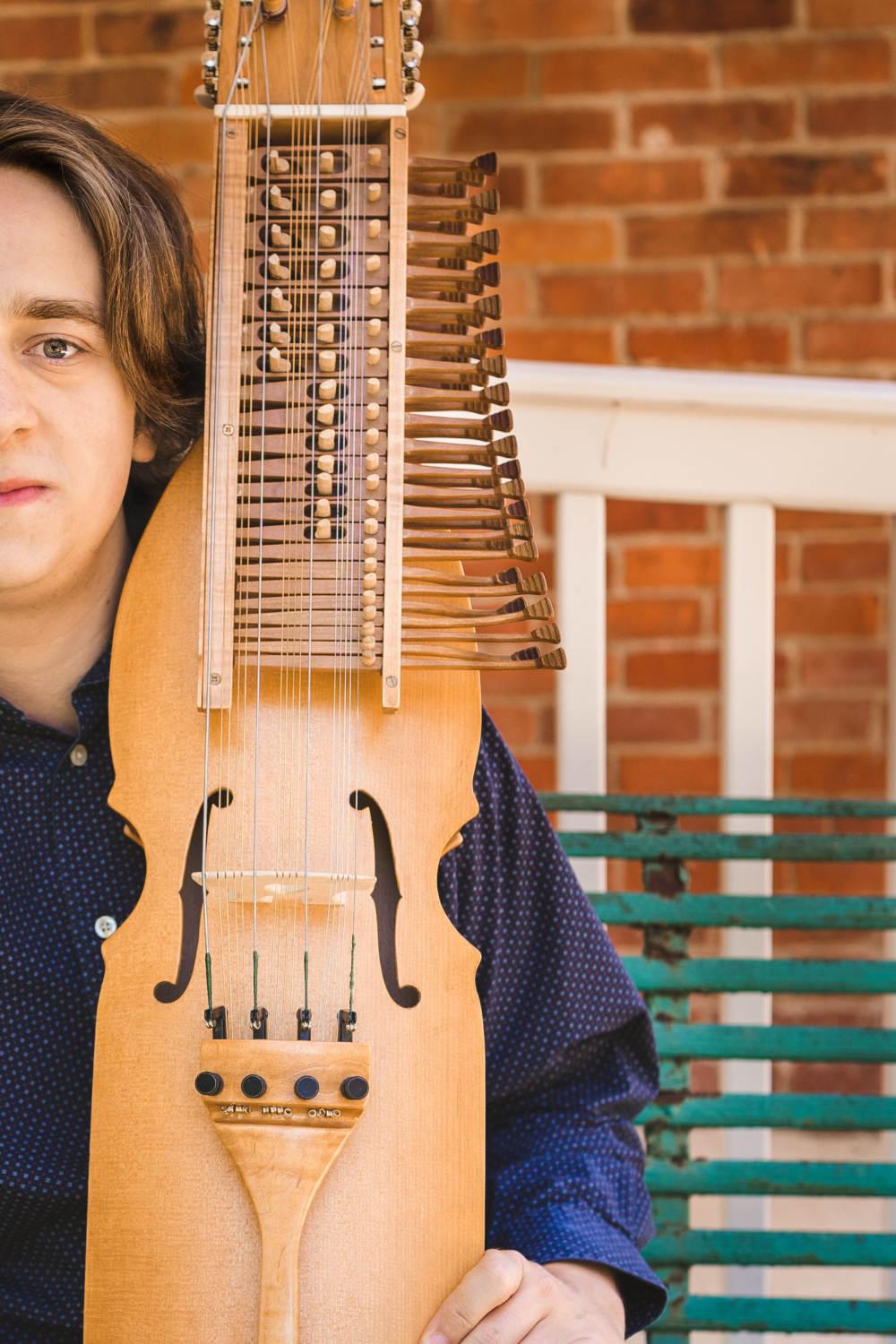 My involvement with banjoist Matthew Davis has landed me in all kinds of interesting situations over the years. One of the notable (and definitely most humbling) ones was practicing his original material for his 2019 release “Outlander.” I have often stated that playing on that album was one of the most musically challenging things I have ever done; the music was very complex. I met today’s guest while rehearsing for that album. While I was sweating and straining to follow chord changes in non-traditional timings and cadences, he executed his parts with acute precision as though it was second nature. I am thankful to have had the opportunity to record with him and excited to introduce this talented individual to our AcoustiCult readers. Grant, thanks for doing this. Tell us a little bit about yourself.

My name is Grant Flick and I’m primarily a violinist but also play a bunch of other instruments. Currently I live in Ann Arbor, MI. My main projects are Westbound Situation and Warren & Flick. I also teach, compose, and record.

I started playing violin in fifth grade orchestra but got bored with it kind of quickly. I remember they wouldn’t let us use the bow for the first month so I asked my Dad about what to do since he plays guitar and banjo. He got me started playing fiddle tunes and bluegrass/old-time.

Yeah, he’s been playing for most of his life. He spends a lot of time playing dobro these days too. When I started playing we started going to local jams and eventually fiddle camps where I started playing/listening to a bunch of other music I wasn’t aware of at the time. As a result, I started playing swing and gypsy jazz and learning repertoire from more of the “new acoustic” and Dawg sound. This also eventually drew my ear to other styles including jazz, fusion, and neo-soul. I should also note that I picked up mandolin about two years after I started violin, and then tenor guitar about two years after mandolin. Learning how to play plectrum instruments helped me a lot in terms of writing, how to groove, and understanding music chordally.

I don’t really know if there was one thing that made me choose to be a musician. I feel really fortunate that this is what I get to do but I can’t imagine what else I would do. Playing music was always fun for me growing up and still is. I’ve been performing for about as long as I’ve been playing so I guess it came somewhat naturally.

This was really hard for me to narrow down to five but I think this is what I’ve landed on, I’m sure I’ll think of something different a week from now!

The David Grisman Quintet “David Grisman Quintet” – I remember the first time I heard this record was blown away. My Dad and I were listening to it on the way home from a jam and I remember exactly where I was when the record started again because we went a long way home to hear it finish. This was my first time hearing Darol Anger on fiddle, Tony Rice, and Grisman on mando. I hadn’t heard/recognized the idea of one’s “musical voice” until hearing this record. The writing, improvising, and ingenuity of this album to me is for sure one of the core musical influences on me.

JED: Oooooh man tell me more about how this album gave you a conceptualization of a “musical voice.” What part of that album prompted you to think about that?

I think it had something to do with how distinctive Anger, Rice, and Grisman sounded. I hadn’t heard anyone really play their ideas before and it sounded like it was their own vocabulary from a bunch of different sources. You could hear each of the influences in their playing but it still sounded individualistic. I really liked that and I think that was my first time encountering that.

Grant Gordy “Grant Gordy” – I think this record will be looked at twenty years from now like how the first Grisman Quintet record is looked at today. It’s so good. It’s such a big influence on a lot of musicians in my generation and it’s a great snapshot into how the new acoustic sound has progressed today. It kind of goes unsaid, but the writing and collective ensemble on this record sets the current standard for how a group of musicians (not just string-bands!) should sound. It’s so tight and spontaneous at the same time. It deserves a lot more recognition but I think it will gain that over time.

Miles Davis Quintet “Relaxin’ With the Miles Davis Quintet” – The playing on this album is so effortless and swings so hard. I first heard this record in high school and for about a month this is all I listened to. I love how much listening is happening on each track of this record. This was the first jazz recording I heard that I really dug deeply into that wasn’t focused on string players.

Brittany Haas & Dan Trueman “CrissCross” – The writing on this album is absolutely astonishing. It’s full of surprises and has a lot of character. It’s one of those records where you hear something new everytime you listen to it. I’d say this one has really influenced a lot of my recent tune writing and encouraged me to try new things as a composer. The tones on this album are also amazing, so much resonance!

Adrien Moignard “Between Clouds” – I love music that takes influence from multiple sources and ends us showing these influences while also still sounding like itself. I think this is a great example of that. Moignard’s soloing is explosive and inventive. I also like how this album has a fun sense of humor to it which keeps everything really fresh. It’s beautifully authentic.

I think I enjoy them all equally, I’d also add teaching to this list.

JED: Ya know I remember hearing Joe Rogan talk about teaching martial arts in one of his podcasts. He said something to the effect of “teaching something is one of the best ways to learn it more thoroughly.” In my limited time spent teaching I found that having to break down what I was doing and try to explain it to a student really gave me great insight into my own playing. Have you found this to be true as well?

Yes, I find that I don’t really know something until I’m able to teach it, and then I’ll often find even more I don’t know about a subject. I think teaching has helped me to stay focused on trying to learn consistently in and outside music.

Hard to just say three, but John Blake Jr. is one the biggest influences on my music. He was a great jazz violinist from Philadelphia and often goes unnoticed. My bandmate Zach Brown (cello) is really inspirational to work with. He is also in Ann Arbor now and is a great soloist, collaborator, teacher, and composer.

JED: Oh cool when did he move from New York?

I think it was late August/early September of 2019. Somewhere in there, the months seem to run together at this point!

JED: Yeah I can share that sentiment – with a lot going on things run together. Sorry I derailed there, who’s another musician you think folks should know about?

Adam Schreiber is the best percussionist I’ve worked with. He’s also out of the Detroit/Ann Arbor area. He listens so intensely and is always playing the most musical ideas. He does a lot of great recording and producing too.

Here’s the info on the instruments I typically gig with. My fiddles are made by Gary Bartig from Acoustic Electric Strings in Minnesota. I have a four string (model-Old No. 54) and five string (London5) made by him. They sound great acoustic and sound acoustic plugged in! I use an AER Compact60 amp if I’m plugging in. My mandolin is a “Jubilee” model built by Brian Ison in Missouri. I have a Baggs pickup on it and I use the para acoustic D.I. My five-string-octave tenor guitar was built by Jim Schenk from Wooden Music in Indiana. I have a K & K pickup inside of it when I need to plug in. My nyckelharpa was made by Earl Holzman in Wisconsin. I use a DPA microphone when amplifying to pick up more of the sympathetic strings.

JED: Man please pardon my ignorance, but what are you referring to when you say the “sympathetic” strings of your nyckelharpa?

If I had an unlimited budget I would probably try to record a couple album’s worth of material during the session.

JED: Thats a first, so like record 3-4 albums in one consecutive block of time?

Why not, right? If you have an unlimited budget just go for it and do the dream projects!

I’d probably try to record an album of my original fiddle/harpa tunes in northern michigan or the upper peninsula, then I’d go to Northern Oregon to record solo or duo works for tenor guitar, and then to cap it off I’d do some sort of jazz oriented session somewhere in northwest ohio where I’m from originally. These are all projects I’ve had sitting in my head but haven’t had the time to do them yet!

I think my favorite is Pilot by my quartet project Westbound Situation but Kestrel by my duo project Warren & Flick is up there as well. Both sound really natural and I’m really happy with how they turned out.

Because of quarantine, I’ve ended up with a lot more time on my hands than I was expecting. I’ve been writing a lot of music and working on some solo arrangements as well. I’ve been playing a lot of viola also since I borrowed one as a student from University of Michigan. Nyckelharpa continues to be a source of inspiration compositionally. I’m hoping to record that album of original tunes I mentioned above sometime in the summer or the fall. I’ve also been growing my studio of students as well.

JED: Are you still a student at U of M?

I am, I’ll be finishing my undergrad in jazz studies a semester early this fall!

JED: Grant that is super exciting man! Congratulations on your upcoming completion of your degree! Thanks again for taking the time to talk to us and share a little bit of your musical story.

Thanks so much for having me on!