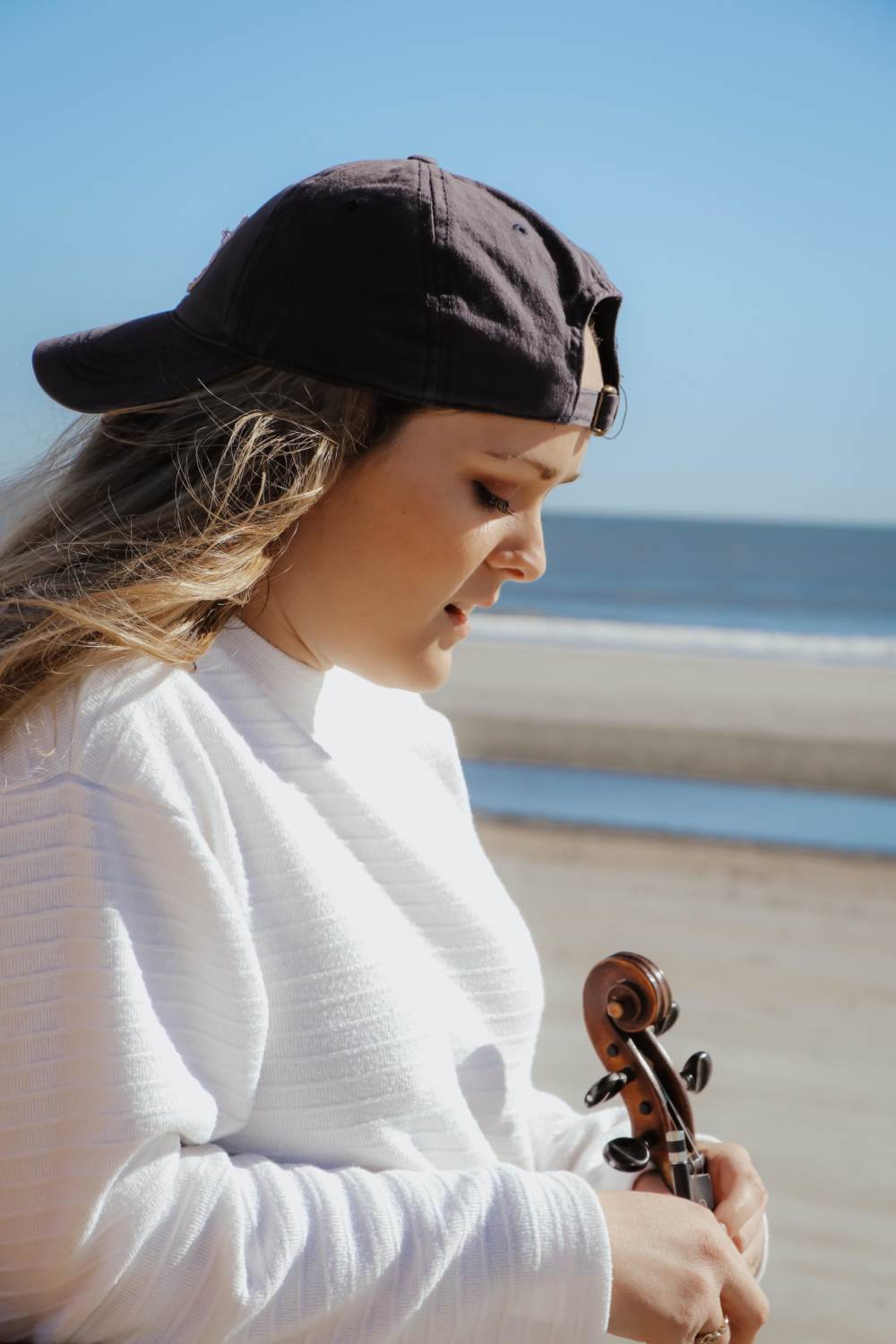 Family bands come and go in the acoustic music world. As young musicians get older, sibling relationships evolve, financial needs increase, and the logistics of “making it work” change over time, family-based groups tend to dissolve. The Gold Heart Sisters are the exception to the rule; they’re currently entering their 15th year of touring together. Shelby, the third sister and fiddle player for Gold Heart, joins us today to talk about her story and her music. Shelby, thanks for being with us! Tell us who you are, what you do, and where home is.

Hey! My name is Shelby Gold. I am the fiddle player and one of the siblings/singer/songwriters in the internationally touring band, Gold Heart. We were based just outside of D.C. in Northern Virginia for 13 years. We now live in Charleston, South Carolina. We have lived here for a little over two years.

Tell us a little bit about your beginnings. Your origin story, so to speak. How did you get into music, and what made you choose this path over others?

I have always loved music. My siblings and I grew up listening to all kinds of music in our home. We heard everything from Steve Earle to Gospel Acappella. When I was 9, I really wanted to learn to play the fiddle, so my mom signed me up for a week-long “fiddle camp”. However, when I got there the first day, I learned that it was more of a classical style violin camp. Yikes! It just wasn’t the kind of music I was thinking of! I didn’t like it at all and begged my parents to let me quit. Since we had already paid for the camp, they encouraged me to stick it out for the week. When the week was up, we returned the rented fiddle and I didn’t touch one for several months. During those months, my sisters started playing around on the mandolin and guitar. They were having fun and I started feeling left out. It wasn’t long before I picked up another fiddle. It was then that I tried teaching myself what I could by ear. I began to really like the feel and sound of this cool instrument. We started sounding out song after song. For my eleventh birthday, I got my very own fiddle.

JED: What were some of the tunes you learned early on? What was some of the music or some of the artists that inspired you and your sisters to keep playing and trying?

I learned the typical tunes when I first started playing fiddle (Arkansas Traveller, Cripple Creek etc….). But pretty early on, Jocey started writing songs for us to sing and play, so I kind of switched from learning traditional tunes to learning breaks for our original songs. It made more sense to do that since those were the songs we were performing.

Like my sisters, I was also into horses. I loved riding Western and English styles. Eventually, there came a point when we had to choose between music or horses. As you know, we chose music! I still love horses, but I’m glad we took the music route. We’ve actually been on some sweet trail rides at some of the festivals we’ve played. Best of both worlds.

JED: No kidding? What are some of the festivals you’ve gotten to ride at? That is pretty neat!

We played a ranch out in California and the owner took us on a trail ride. It was pretty sweet! 🙂

Oh, I have so many favorite albums, but here are my top five.

I think every album has influenced my style in some way. There’s heavy fiddle, harmony, songwriting and emotion on each of these cd’s. I feel this definitely comes out in my music as well.

That’s tough because I love parts of each.

Recording: I love getting up in the morning and being excited about the songs we will record for that day. Studio jokes are the best and excessive amounts of coffee are a must.

Live performance: I love being on stage with my family. They are the coolest people I know. My favorite part about live performances is the energy we create, the secret eye communications and funny looks we give. It’s kind of like our own secret language. I love traveling to different parts of the country and the world, seeing and experiencing new things! I love our awesome fans. It’s great making friends in music. It’s crazy to think that if it hadn’t been for music, then I wouldn’t know so many amazing people!

JED: I’ve gotta interject this – the fact that you can really enjoy working with your family and find joy in the subtle parts of your performing is amazing. In the time that your sisters and you have been playing together I’ve seen MANY family bands come and go. I think it is awesome that y’all have stuck it out for as long as you have, that you can all work together, and that you can genuinely enjoy it. That being said, d’y’all ever just duke it out? 😀

Haha sure, sometimes we can get on each other’s nerves. But working so closely with each other we’ve learned that it’s best to just shake it off, laugh about it and move on.

Writing: I enjoy writing so much. I really do. It’s a gift from God. Sometimes Jocey and I will hear something, a saying or a phrase, and we’ll look at each other and say…. “Let’s write a song about that!” With writing, you can really capture a special memory or a feeling that’s specific to you, but then when you bring it to life with harmonies and instruments, you can create a feeling and memory for the listener too. It’s pretty amazing.

I have a Frank Daniels fiddle made out of blonde quilted maple. It is so beautiful. My parents gave it to me for my 11th birthday and I just love it. It’s the most consistent and sweet-sounding fiddle I’ve ever played. I also have two other fiddles that Ron Stewart re-voiced for me and I play those too. My great aunt gave me one that was plastered with silk flowers and glue, and used as a decoration. My mom bought me the other fiddle when we were shopping at an antique shop. Both fiddles have a totally different sounds, but they tend to lean toward the deep side.

I mostly play acoustic music, so my fiddle and a condenser mic are all I really need. I am also sponsored by NS and have an electric fiddle that I like to use for different effects. It’s really fun. I’ve recorded with a POG several times and that creates a really cool sound. I also enjoy playing the mandolin, guitar, bass and piano.

JED: When you say a POG are you referring to an Electro-Harmonix pedal?

Yes. It’s a fun sound to experiment with.

JED: If you were given a $100,000 budget for an album production, what would it look like?

My dream would be to set up a studio in a lighthouse. I think that would provide incredible inspiration.

JED: Now that is a first. I’ve never heard of someone trying that.

Right? Haha I’m sure someone will try it now. It would be awesome to be there for a couple weeks before we started recording, just to settle in and prepare. I’d want an amazing engineer and producer who knows us well and understands and believes in our music. Good people, who magically know exactly how to draw out our very best stuff. Top-notch recording gear would be a must. It would be fun to collaborate with some of my favorite artists on a song or two as well.

Hmm…. I think I’d have to see what the vibe of the project was before I could choose.

Ethan Hughes is an excellent dobro/guitar player and singer who lives in New York currently. Will McSeveney is a really great banjo player from the Seattle area. Norm Olsen is from Washington as well and plays guitar and has an awesome voice. We’ve had the pleasure of playing music together. It’s always a lot of fun.

Places I’ve Been by Gold Heart. It is our most recent full album. Like most of our albums, it features 12 all original songs. We poured our hearts into that project and it was a total blast. We had a really fun time in the studio and we always have a great time performing those songs on stage as well.

JED: Tell me a little more about that album, did you feature any special guests on it? Where did you record it at?

We recorded Places I’ve Been with Ron Stewart in Indiana. We had a blast. We had Josh Shilling of Mountain Heart sing a harmony vocal on a song my dad an I wrote entitled “O.K. Corral.” He did an excellent job. I think our vocals sounded really nice together.

I am working on writing and arranging songs for Gold Heart at the moment. I’m super excited about getting them out for our fans to hear! I also do some recording with a good friend who is a great score writer and composer. I enjoy being part of his recordings.

JED: Well Shelby I’ve thoroughly enjoyed getting to talk with you and hear about your story and you music. Thanks for taking some time to talk to us, and stop in and say ‘hi’ again soon!

You can find out more about Shelby’s music at her band’s website. Featured photo by Jocey Gold.