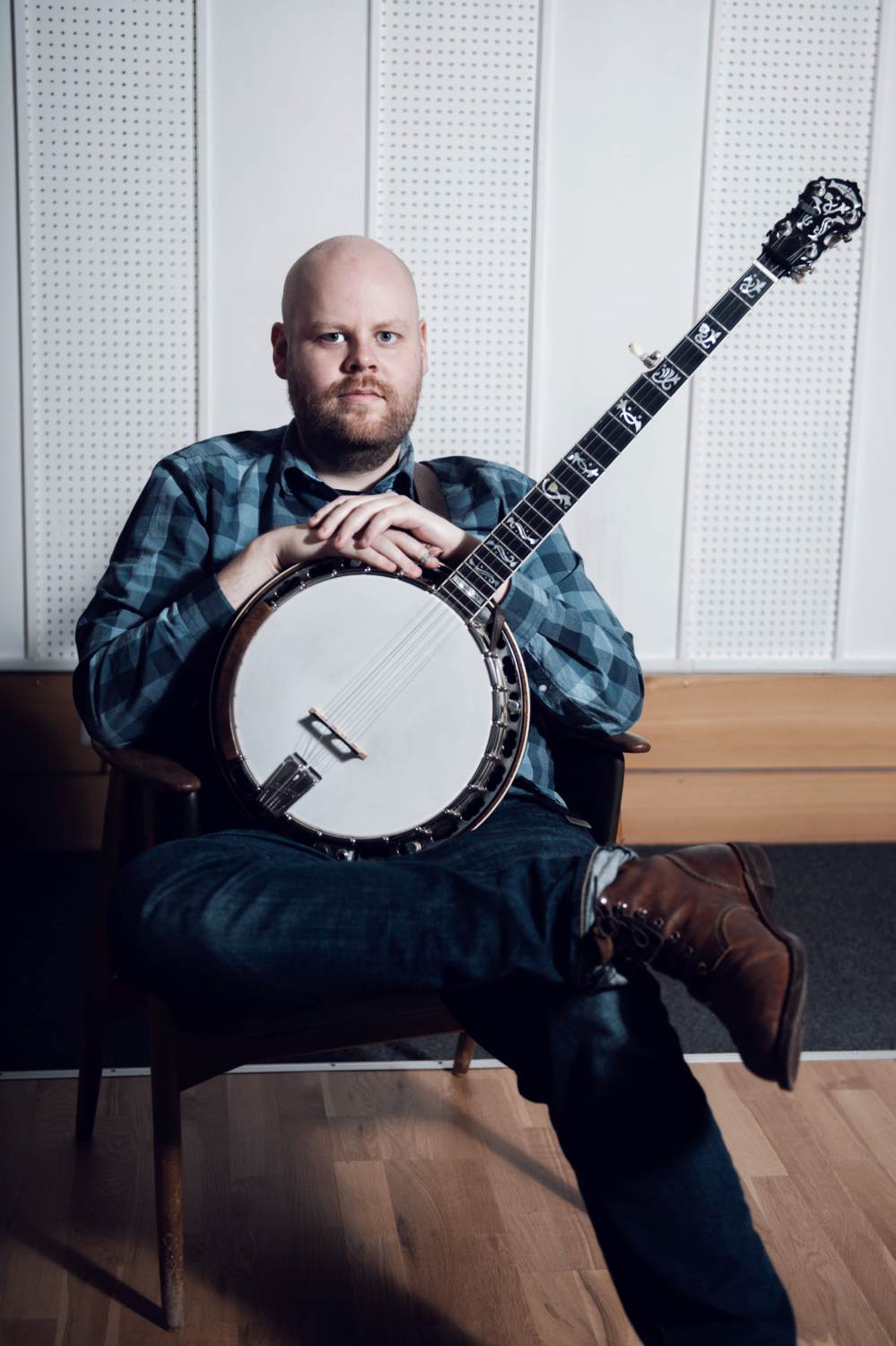 All the way from Oslo, Norway today, we’re speaking with banjo player extraordinaire Mikael Jonassen. Mikael, tell us a bit about who you are, what you do and where you’re located.

My name is Mikael Jonassen, banjo player. I’m 30 years old, grew up in a town called Bodø in Northern Norway, and now I live in Oslo, the capital of Norway with my wife.

I played piano when I was a kid, but never got any good because the music I was playing did not really get to me on a personal level. I played a little bit of guitar in my early teens and went to music high school. In Norway, you can specialize in high school. I had always been interested in music so I opted for the music class. In the middle of that came a major turning point in my life. When I was 15 I went for a trip to the family cabin, and to keep me from getting bored, my mother bought me a copy of some American guitar magazine. After a couple of days at the cabin I had read all the articles and “tips & tricks” I would never use, so I started reading all of the one-paragraph record reviews. One that struck me as interesting was of Hayseed Dixie’s album Let There Be Rockgrass, and when I got home, I found the album, and was absolutely floored by my first encounter with the banjo and bluegrass sound.

After that I went deeper and started devouring everything I could find with a banjo in it, going back to Flatt & Scruggs and also every single Béla Fleck album and bootleg recording I could find. I bought finger picks, tuned my Epiphone electric guitar to an open G and started working on rolls. When I got my first banjo a little later there was no looking back for me.

I did a bachelor’s degree in music teaching and later some more music studies and have also been fortunate enough to go over to the US a couple of times to take lessons with some great players. I have been playing professionally since I finished my musicology master’s thesis about Earl Scruggs’ impact on banjo technique back in 2016.

That’s a really hard one.

Béla Fleck’s Tales from the Acoustic Planet is the first that comes to mind. I’ve always been a huge fan of borrowing the bluegrass banjo from its safe home in bluegrass and taking it to places you wouldn’t normally think it would fit. Béla keeps the banjo very idiomatic with his technique but the instrumentation and structures of the tunes were as far as I know uncharted territory for the banjo at the time. The tunes are also beautiful. It probably influenced me the most out of all the albums, just judging by the amount of time I spent transcribing Béla’s solos on this album.

Béla’s Drive album is another one of my all-time favorites. Unbelievably good. I never get tired of it man. A favorite for me. For me it blends the more progressive influences with the drive of classic bluegrass with in a perfect way.

Genesis – Selling England by the Pound. I’ve always loved progressive music, and especially progressive as it was used to describe 70’s prog rock from the UK. This is one of the albums I listened most to when developing as a musician. The non-jazz approach to make chord progressions inspires me to this day.

Punch Brothers – The Phosphorescent Blues. When this album first came out it completely blew my mind with its blend of virtuosity, incredible arrangements and the progressive elements I’ve always loved. All the time staying fairly true to the classic bluegrass band instrumentation.

What I enjoy the most about being a musician is being part of the musical interplay between the people on stage, especially in the middle-ground between improvisation and written music. There are some very good opportunities for this in bluegrass music, but I really enjoy walking on the line between those two forms of musical expression.

In the US, I wish more people would know about the aforementioned multi-instrumentalist Stian Carstensen. A master of all trades, he’s mostly seen playing accordion, and I don’t think anybody does that better than him. Look him up with the bands Farmers Market or Gammalgrass.

In the bluegrass world, it’s hard for me as a geographical outsider to know who’s under- or overrated. But I think my friend Ryan Cavanaugh deserves some more attention for his outstanding work on the single string technique he’s created on banjo.

Last year I got to go to the Béla Fleck Blue Ridge Banjo Camp in Brevard, NC and I was absolutely floored by young banjo virtuoso Matthew Davis that I hadn’t heard about. It’s hard to stay completely in the loop being on the other side of the ocean, but I’ve since checked out as much of his playing as possible and he’s definitely one to watch out for. His work with Circus No. 9 and his new solo record is just amazing.

My main and only banjo is a Deering Tenbrooks Saratoga Star that I bought in 2011. I’ve tried a lot of banjos but this is still my favorite banjo that I’ve ever played. It’s strung with American Made Banjo strings, gauges 10-12-14-22w-10. I use BlueChip JD-L thumbpicks, National NP2 finger picks and a Paige Clik capo. If someone wants to tell me about a better capo I’m open to suggestions. For bluegrass/acoustic music the band usually plays into my Audio Technica AT4033 microphone. I have a DPA 4099 when I need to mic up alone, and if I really need to plug in I’ve got a EMG ACB-5 pickup, but I try to avoid using it. For my electric band Deku Trio I run the pickup signal through a Line6 HX Effects multi-effects board to make it sound weird.

Going to studio is so expensive that I almost never get a chance to really take the time in the studio with the projects I record. Mistakes are made and compromises are done. With that budget I would have just spent several weeks with some friends in the studio, probably the great Store Studio in my hometown Bodø. It would be nice to afford the time to be a perfectionist for once.

I’ve recorded banjo on quite a few projects but haven’t really been able to put down the money for serious studio time with any of my “own” projects. We released three singles with The Fretworkers last year that that turned out pretty good, and I’m quite happy with the EP that Deku Trio released a couple years ago.

I’m working on quite a few different projects these days. The last few years I’ve mostly been playing with the bluegrass trio The Fretworkers, and the instrumental fusion-ish group Deku Trio. In 2019, I’ve got two new bands that I’m really excited about. First, the mashy five-piece Blue Tram with some of Norway’s best bluegrass pickers. The band presents a rare and great opportunity to play some real, hard-driving bluegrass. My latest project is a new trio with the amazing Norwegian flatpicker Jakob Folke Ossum and the American fiddler Michael Donovan that recently moved to Oslo with his Norwegian girlfriend. This is more on the progressive side, and we have been working really hard on some good original songs with intricate arrangements.

When I’m not playing in these bands or being sideman in a whole lot of other projects I organize the public jam sessions around town, and I run the only regular bluegrass concert series in Norway called Bluegrassaften Oslo. If anyone reading this is on tour through Northern Europe and wants to stop by the capital of Norway, please contact me. The bluegrass scene in Norway is really growing now, and there’s a lot of young, great players and fans and we love nothing more than visitors from the US!

ACOUSTICULT: Man it is good to hear that you’re staying so busy across the pond! Keep us in the loop on the latest and greatest from Norway!