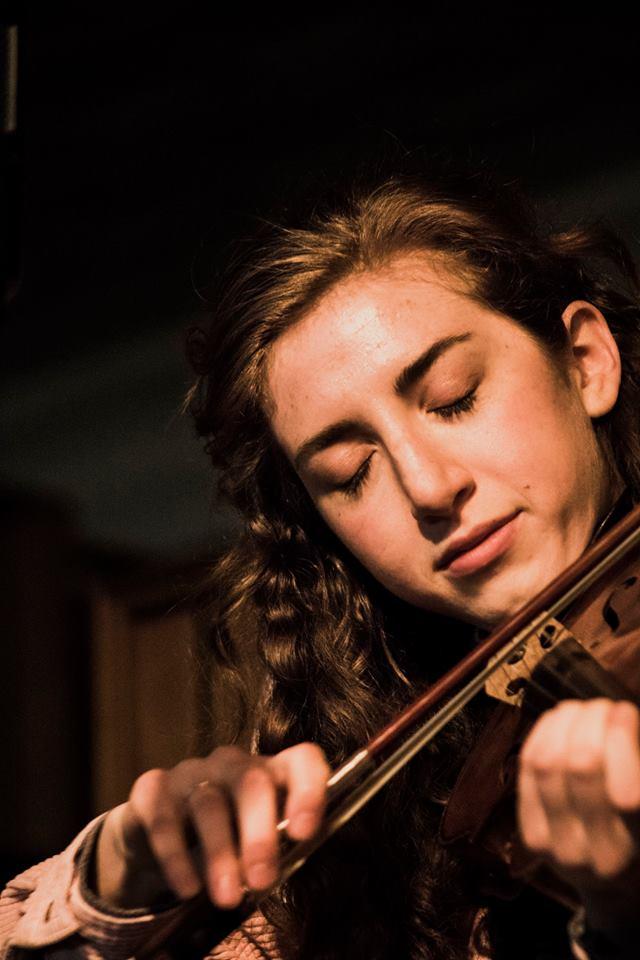 Hey Willa! Thanks for taking some time to chat with me today. If you don’t mind we’ll dive right into it; tell us a little bit about yourself.

My name is Willa Finck. I’m a classically trained violinist currently playing in the Rochester Philharmonic Orchestra. I moved to upstate NY from western North Carolina where I grew up playing Celtic music in a quasi-family band. Since living in Rochester I’ve delved more into the bluegrass/alternative-folk/singer-songwriter world and I play with two groups that I’m very excited about!

I guess that’s a self-coined term for a mostly family band! Meaning one of the members was an unofficial family member, but not family in the formal sense.

JED: That is great. I guess I’ve been in a few configurations like that, but I never thought to call them that. I’m gonna steal that phrase.

My dad, David Finck, is a fine-woodworker-turned-luthier who has always had his workshop in our house. As such, he was the main entertainer of my older sister and I when we were little. When we were two and four he started taking us to Suzuki violin lessons to pass the time. Western North Carolina is, of course, a huge hub of old-time and bluegrass music so we along with another girl close to our ages, started fiddling when I was about five and soon after that our band, the Forget-Me-Nots, was formed. It was a triple fiddle band with my dad on guitar (Given our place of origin I’m not sure how we transitioned into a Celtic band, but so it went!).

Because I started playing when I was so young I don’t have any memories of not knowing how to play the violin, so it really feels like an extra limb sometimes. Despite that, I wasn’t positive that I wanted to pursue music as a career until the very end of high school when I just went kind of crazy about classical music. I’ve realized that there isn’t a whole lot of crossover between the classical and folk worlds, so I’ve had somewhat of a dual life going on here in Rochester, but I love too many types of music to only play one!

JED: So tell me about moving to Rochester? How did that and playing in the Rochester Philharmonic Orchestra come about?

I moved to Rochester to go to the Eastman School of Music. I got my Bachelor’s degree in 2018 and five days after graduation won an audition for my spot in the RPO!

JED: What a way to come out of graduation! What are some of your favorite albums, and how do they influence your work?

I know I’m going to forget some, but…

Who’s Feeling Young Now – Punch Brothers (Although I’m basically in love with all of their albums and feeling particularly partial towards All Ashore lately…). Something that I love about the Punch Brothers’ music is how accessible, but complex it is. You can immediately get a melody stuck in your head, but there is still so much to notice listen after listen (and I’ve listened A LOT…). Who’s Feeling Young Now is a special album for me because I first heard the Punch Brothers on their tour promoting this album and instantly fell in love, which doesn’t happen very often for me with new music!

Shaken By a Low Sound – Crooked Still. I love this album because it has a lot of classic tunes on it, but Crooked Still’s version are always so unique! If you could wear out a CD I would’ve worn out this one.

Fiddler’s Green – Tim O’Brien. I’ve got a “familiarity-breeds-affection” situation with most of Tim’s albums. I’ve listened to them so much for such a long time that I can’t help but love them! In the same vein as Crooked Still though, I think Tim O’Brien arrangements are really interesting.

Man with the Wooden Flute – Chris Norman. This has to be the most pleasant music I can think of. I love everything about his interpretations of tunes – so simple and light. “The Fairy Queen” in particular is one of my favorite songs of all time.

Performing is definitely the best part about being a musician for me. As trite of a statement as this may be, art and music are all about human connection and live performance is the most tangible way to feel that.

JED: I definitely don’t consider that statement “trite.” The truth bears repeating 🙂 Who are three musicians that you think are underrated or deserve more notoriety for their art?

I don’t know if I can answer this question. The people I love to listen to are on such a pedestal in my mind, I don’t know how under or overrated they are to everyone else!

JED: Let me word it a little differently, who are some musicians you’ve come across that you wish more people knew about?

Hmm.. there’s a local Rochester musician, Cammy Enaharo, who has one of the prettiest voices I’ve ever heard and writes really nice songs, so I’d definitely recommend checking out her music.

Another of my favorite local bands is The Saplings. They’re a 10-piece jazz-pop band – all of them went to school with me at Eastman – and their music is really awesome!

I play on a 2013 violin made by my dad, David Finck. It was the second violin he made (my sister plays on the first) and it’s beautiful! I try to think about “gear” as little as possible, so I use the same Countryman clip-on mic that I’ve used since I was probably ten years old…

JED: Hey if it ain’t broke there’s no need to fix it. No pedals or anything else? What kind of bow and strings d’you use?

Nope, no pedals or anything. I usually use Evah Pirazzi strings. My bow is kind of a funny story; no one has any clue where it came from . . . there are no markings on it whatsoever to say who made it and no one has any memory of buying it, yet I’ve been using it for over a decade!

Man, this is also a tough question! I feel like I’m throwing off the interview, but I don’t think I have a good answer for this one either.

JED: No no quite the contrary, the fact that you’ve never thought about it before is the point; what would you want to do if you could? What seems ideal?

In that case, I still won’t be very specific, but . . . I’d say that dream album production would include unlimited studio time and working with musicians who inspire me and who I can learn from.

JED: Anyone in particular you’d want to include in the process?

I don’t think so… I like to stay pretty ambiguous with my dreams and plans, so I am satisfied with whatever comes along!

JED: I can definitely understand that approach. What is your favorite album or recording that you’ve made to date?

Probably my self-titled EP that came out this past December because I was the most out of my comfort zone for this particular project!  I worked with two good friends who are both jazz musicians by trade and I was mostly singing, so it was a very new type of musical experience for me.

JED: Tell me more about this project. How did it come about? Was it just you and your two jazz colleagues or did you have other guests on it?

I had written a handful of songs that didn’t feel like a good fit for my folk band Copper Hill, but I really liked them so I just asked those two friends if they wanted to embark on a wee adventure with me and they very kindly agreed. Unfortunately it has only been a virtual project thus far (we’ve never played for people in real life), but hopefully sometime in the future we will get that going. Yes, it was just the three of us! We all stood in different corners of one big room and recorded together and then I added a couple vocal harmonies afterwards.

Lately my time is mostly spent on classical music. Both of the groups that I mentioned at the top of the interview have members flung far and wide this year, so logistics have been pretty tricky, but I’m long distance working on some music with the friends from the above mentioned EP and my folk band, Copper Hill, is on kind of a constant simmer.

I and a previous interviewee of yours, Ethan Hughes, have been getting together recently to play murder ballads . . . a good way to pass the time in the wintry north!

JED: Definitely! Well Willa I’ve really enjoyed getting to talk to you and know your story. Thanks for chatting with me!

My pleasure. Thanks for reaching out and stay well!