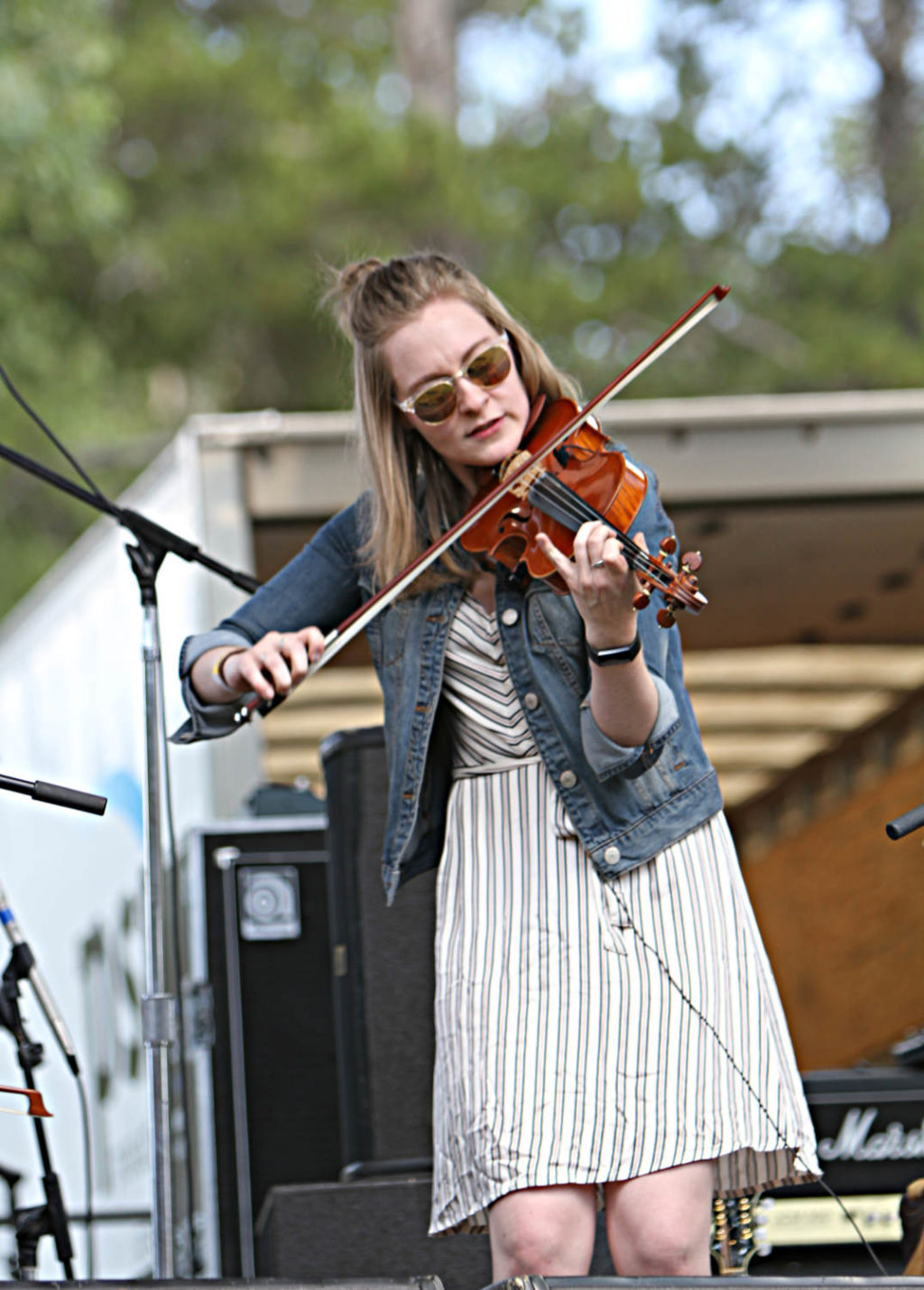 Today I have the pleasure of speaking with Ms. Amelia Ransom. I met her and her family at my first Rockygrass experience in 2009. Although we’ve crossed paths in the last 10 years on a few occasions, we haven’t gotten to catch up like I would like until now. I’m glad you’ve made time to tell you us a little bit about your story, Amelia! Introduce yourself to our readers.

My name is Amelia Ransom. I am a multi-instrumentalist/songwriter and also work in Artist Management/PR.  I grew up near Boulder, Colorado, but moved to Nashville, Tennessee about 5 years ago.

Not everyone can say they have always known what they wanted to do with their life, but that is exactly the case for me. My immediate and extended family includes a vast number of musicians, so I was lucky to be constantly immersed in music from the time I was born.  My passion for music truly began at the age of three when I was inspired to learn the violin by watching my sister at her violin lessons. From the beginning, my mom ensured I had a foundation in classical music, so my youth was consumed with hours of lessons, practicing, group classes, quartet rehearsals, orchestra rehearsals, performance classes, etc. For me, this strict and competitive environment was an incredible way to grow up. I enjoyed every second and I am grateful beyond words to have been blessed with such a rewarding experience.

After studying classical violin for about five years, I saw a PBS special about bluegrass music, which introduced me to a world outside of the classical studies that consumed me.  The show included performances by Alison Krauss, Ricky Skaggs, Del McCoury, Nickel Creek, and so many other amazing musicians. Although I continued with rigorous classical instruction through the end of high school, bluegrass and folk music quickly became my passion, and within a few years I had added mandolin, guitar, and many other instruments to my “arsenal.” I had the opportunity to attend Mark O’Connor’s string camp in California when I was about 14 which opened my access to alternative styles even more. At this point I was recording and touring in a folk/bluegrass/americana/roots (etc.) band with my brother and sister, and my desire to be a professional musician continued to grow stronger every time I stepped on stage.  Somewhere in the mix, around the age of 10, I also started to write music which is an interest that has continued to grow and develop with time.

Fast forward to present day–I am now 25 years old, living in Nashville, TN where I split my time between touring/recording (in the same band with my brother and sister), working in the “biz” on Music Row, and hiring out for gigs/sessions with other artists in Music City.  Being a professional musician is not always easy, but for me it is something that I can’t live without. Music chose me, and I consider myself fortunate to pursue a career I adore so much.

JED: I’ve heard that a lot in the past; “music chose me.” The love for the music really drives you to pursue it harder than anything else. What are your favorite 5 albums, and do they influence your work? If so, in what ways?

This is the most difficult question on this list!  It is challenging to explain how a particular album can have such a massive impact when all the necessary elements align. If I hear the right song at the perfect moment and the subject hits exactly what I’ve been going through at the time, it creates a surreal experience. I suppose that [surreal experience] is what I’m always searching for when I listen to an album. Of the five I listed below, each record has impacted me in a unique way. When I was young and only studying classical music, I always paid more attention to melody and rhythm over lyricism. As I became more influenced by folk music, I realized how important good lyrics are to writing a song, and these albums were all transformational with my songwriting process. I also believe all of the albums listed below do an excellent job of capturing a mood on an album, which in turn tells the listener a story as they listen from start to finish. Finding an album that tells the audience a story through its tracks can be rare and challenging, but I think it’s hugely important, and these albums do that well.

Live performance, no contest.  Nothing compares to the rush of getting on a stage and playing music in front of a crowd.  That said–writing has recently taken on a larger role for me–so I will add that although it’s a different rush than live performance, the feeling of finishing a new song is pretty great!

Honestly, there’s so much good/underrated music out there right now, you could ask me the same question in five minutes and I’d give you a different answer.  I’ve been a fan of Sierra Hull and Ruston Kelly for a while but I just saw them live at AmericanaFest and they both blew me away, so they’re definitely on my list. I recently discovered an artist named J.S. Ondara and can’t stop listening. Not sure if he’s considered underrated, but his album “Tales of America” is worth a listen (or two).

When playing shows with my band, I’m switching back and forth between fiddle, guitar and mandolin throughout the set. I play a fiddle built by an Italian maker in 2003. It took several months of trying a plethora of instruments before I found the one I wanted, and I’m not ashamed to admit this violin is my prized possession!  My guitar is a Martin D-28 Vintage Series. There’s a long story, but the short version is the guitar was given to me last year by a good buddy who has been a friend of my family for many years. We first met at a bluegrass festival in Denver many years ago, so it’s a nice connection. I used to play a junker Yamaha, and I pinch myself every time I get to take the Martin on stage. My mandolin is a Michael Kelly. The sound is nothing extraordinary, but it’s aesthetically beautiful. Plus the mandolin was my birthday present when I turned 10, so I have a sentimental connection. In terms of audio, after realizing I could book more gigs in Nashville if I had a pickup on my fiddle (ha!) I invested in an audio system at SummerNAMM 2018 from a company out of Rhode Island called Your Heaven Audio. They’re great folks and their system sounds excellent on my fiddle! For strings I use Pirastro-Evah Pirazzi on my violin (there’s the classical influence), and for mandolin & guitar I like Straight Up Strings, or D’Addario.

I have a notebook of songs that are waiting to become an album, so this is the perfect question! I’d start by securing a great producer who “gets” my vision (Dave Cobb, T-Bone Burnett, and Gary Paczosa are at the top of my list!), recruit a band of killer talent, and bring them to North Carolina to record at Echo Mountain studio because I’ve always wanted to track an album there. Since my songwriting is so story-oriented, I would also love to create a series of music videos to visually narrate the songs on the album. The Lumineers did this with their last two albums and I think it is an amazing expression of art. Of course I would also make sure I reserve a decent portion of the money for distribution/promotion/publicity once the album is finished. Working on the business side of the industry has taught me it is wise to have extra money built into the budget for the pesky business stuff that is easy to forget about.

JED: Who are some musicians you’d want to feature on the album? Who would you want mixing & mastering? Who’d cater? 😀

I have been fortunate to cross paths with so many talented musicians over the years, so I would definitely utilize those resources in putting together a stellar band that would best compliment the songs.  If there were absolutely no constraints on special guests/fantasy duet partners, Alison Krauss would be at the top of my list. I mean…what more could anyone ask than to record with their musical hero?! Singing with Jackson Browne would be a pretty cool dream as well.  Honestly, mixing and mastering isn’t something I’ve given a lot of thought to…I’d probably look at my favorite albums and see where they were mixed/mastered and follow that lead. Catering would definitely be all the dumplings and peanut sauce from Sister’s Pantry in Boulder.  Jed, you’ve been to RockyGrass…you know how good those dumplings are! And copious amounts of coffee from Frothy Monkey in Nashville!

JED: You have excellent taste. Oh yes – I vividly remember the Sunday night that they were shutting down; they had a 2 for 1 deal until they ran out and I know I bought 3 boxes, but I may have bought more. Good times. What is your favorite album or recording so far that you’ve made?

I tend to put 100% of myself into whatever I’m working on, so I would probably say my favorite project is the one I’m working on with my band right now.  I would elaborate more, but the recording is currently untitled and still very much a work in progress so details are vague…even to me. But honestly the best answer to this question is I haven’t made my favorite album yet!

JED: Ooooh cool! Please keep us in the loop as to when you plan to release it. Thanks for taking the time to sit down and chat with me Amelia! It has been good to catch up with you.