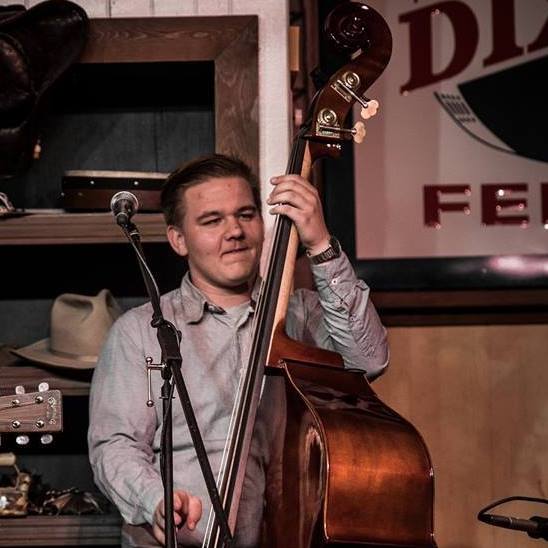 Jake Riggins joins us today to talk bass. Jake, tell us who you are, what you do and where you’re located.

I have always loved music. From an early age I noticed something special about music. There is power in music. It can make you laugh and make you cry. It can motivate you, lift you up, bring you back to a certain time or memory, and on the flip side it can bring you sorrow and pain. That was amazing to me that you don’t just listen to music  you experience it. And I wanted to be a part of doing that for someone else.

For as long as I can remember I wanted a career in music. When I was nine I took guitar lessons long enough to learn to make out a few chords and I spent a lot of time in my room playing along to what was on the radio. At fourteen, I started playing in the praise band at church. I feel like that was a huge part of my initial growth as a musician, and it was where I met my first musical mentor, Jamie Jones, the youth pastor and music leader at my church. That experience got me used to playing and singing in front of people and it showed me that I could worship and glorify God through my music.

Then in high school, when everyone was deciding on what they wanted to be and what colleges they were going to go to, all I could imagine doing was music. It didn’t matter what I did. I just wanted a job that was tied to the music industry.

But I didn’t know how or where to even start. So I decided to go to college for Audio Engineering. After looking at a few different colleges, I learned about Bethel University. They had an extra-curricular program called Renaissance where they would give you scholarships to perform, which meant I could still go to school for recording and go to rehearsals for Renaissance after school.

My youth pastor Jamie went with me to my audition. I auditioned for a spot in the bluegrass bands which was funny because I had no idea how to play Bluegrass. I had barely been exposed to it growing up.

I started school at Bethel in the fall of 2015.

ACOUSTICULT: Same bro. Seems like a lifetime ago doesn’t it?

My time at Bethel University will always be very special to me. It is where I met my wife, Kelly, who is an amazing singer and songwriter, many of my closest friends, and a huge mentor of mine, Stephen Mougin, who directed the Bluegrass program. It was also where I was introduced to the upright bass.

ACOUSTICULT: So you were introduced to the upright bass only a little over 4 years ago?

Yep. Two weeks into camp. I am so glad Stephen gave me a chance. I initially auditioned on guitar, and boy was it rough. After being there for a couple weeks, the band I was placed in had two guitar players and no bass player so I decided to learn how to play bass. That was the best decision I could have made. I fell in love with it which made it easy to spend the time learning the instrument, researching, and listening to different upright bass players to figure out the way it is supposed to be played. It was a both a blessing and a curse to be actively performing while learning. I had plenty of opportunities to make a fool of myself with it, but I am so thankful for it. It turns out no matter your skill level or how long you’ve been playing you still have plenty of opportunity to make a fool of yourself!

After two years at Bethel, Stephen told us that he was stepping away from the program to focus more on his record label, Dark Shadow Recording. For those reading this, take a moment to check it out. Stephen is awesome at everything he does! In the two years I spent at Bethel I learned a lot about the instrument and about bluegrass music, and I knew that I wanted to do it for a living. I decided to transfer to East Tennessee State University’s Bluegrass, Old Time, and Country music program. I learned so much there and got to meet some of the industry’s best musicians, songwriters, and teachers like Adam Steffey, Tim Stafford, John Gardner, and Hunter and Sally Berry, to name a few. After a couple semesters there I was in one of Sally Berry’s band classes and she told me that the Malpass Brothers were looking for a bass player. And I have been with them since. It’s funny how God’s timing works. I was working a lot of late nights at a gas station, renting a corner of a friend’s living room to sleep, going to school full time, and trying to get better as a musician by practicing and playing a lot of music with friends.

When I listen to music, I try to put myself in the song. I listen closely to the lyrics, the harmonies, and of course what the bass player is doing. Picking just five albums is hard, but here they are in no particular order:

ACOUSTICULT: Which part of your music career do you enjoy the most – live performance, recording, writing, etc?

Right now I think my favorite part of my career is the live performing and the hands-on learning. Playing with The Malpass Brothers and going from playing bluegrass regularly to country music has been a huge learning experience for me. I started learning how to play different shuffles and actively listening to traditional country a couple weeks before my audition and I have been learning more about the music everyday. There is always more to learn in music and I think as long as you’re always in the mindset of looking for ways to grow on your instrument you’ll keep getting better.

That’s a tough one. There are so many great musicians out there today. I really like what Josiah Tyree is doing with the Kody Norris Show. He is a great traditional banjo player and is an awesome tenor singer. We have ran into those guys quite a bit at different Bluegrass festivals and I think he really adds a lot to their show. Also, I think my boss Taylor Malpass gets overlooked a lot with his lead guitar playing. Many folks love his humor on stage and his ability to capture an audience, but he truly is one of the best traditional country guitar players out there. It is an honor to get to play with him. Thirdly, I met a guy named Adam Miller through ETSU a while back and have picked with him a few times. Is is a great musician but I think his vocals are hard to beat. I think he will make a heavy mark in the bluegrass world in years to come. There are so many I could name but these are the first few folks that came to mind.

When we aren’t flying to gigs we travel in a sprinter van so the more efficient I can be with my equipment, the better. I play a Chadwick Folding Bass with a Fishman Full Circle pickup through a 100 watt Fender Rumble amp. That amp is super light weight and has a killer direct XLR output so it works out well. As far as strings go, I use medium D’Addario Helicore Hybrids.

If I were able to to spend that kind of money on album production I would probably record in the old “Quonset Hut” studio in Nashville. Some of the most iconic country music recordings came out of that studio in the 1950s through the 1970s. I believe it is owned and used by Belmont University now. The album would have a traditional country sound and I would love to hire a ton of guest artists like Charley Pride, Gene Watson, Moe Bandy, and Ricky Skaggs to play and sing on it. It would be awesome to have some of the Nashville legends like Jimmy Capps and Lloyd Green to play on it as well, to name a few.

Honestly, I haven’t recorded on an album yet, but I hope to in the future. I have played on a few demos and small recordings for ETSU and Bethel while in college. This past summer I was lucky enough to play on a taping for Larry’s Country Diner that aired on RFD TV in September. I am very grateful to have been a part of that and play with Jimmy Capps again. I can’t say enough good things about him. In May, we also played on the Ernest Tubb Record Shop’s Midnite Jamboree which airs right after the Saturday night Opry on WSM.

Right now I am just working on becoming a better musician everyday. I am having a lot of fun on the road and I am very blessed to be able to do what I love at such a young age.