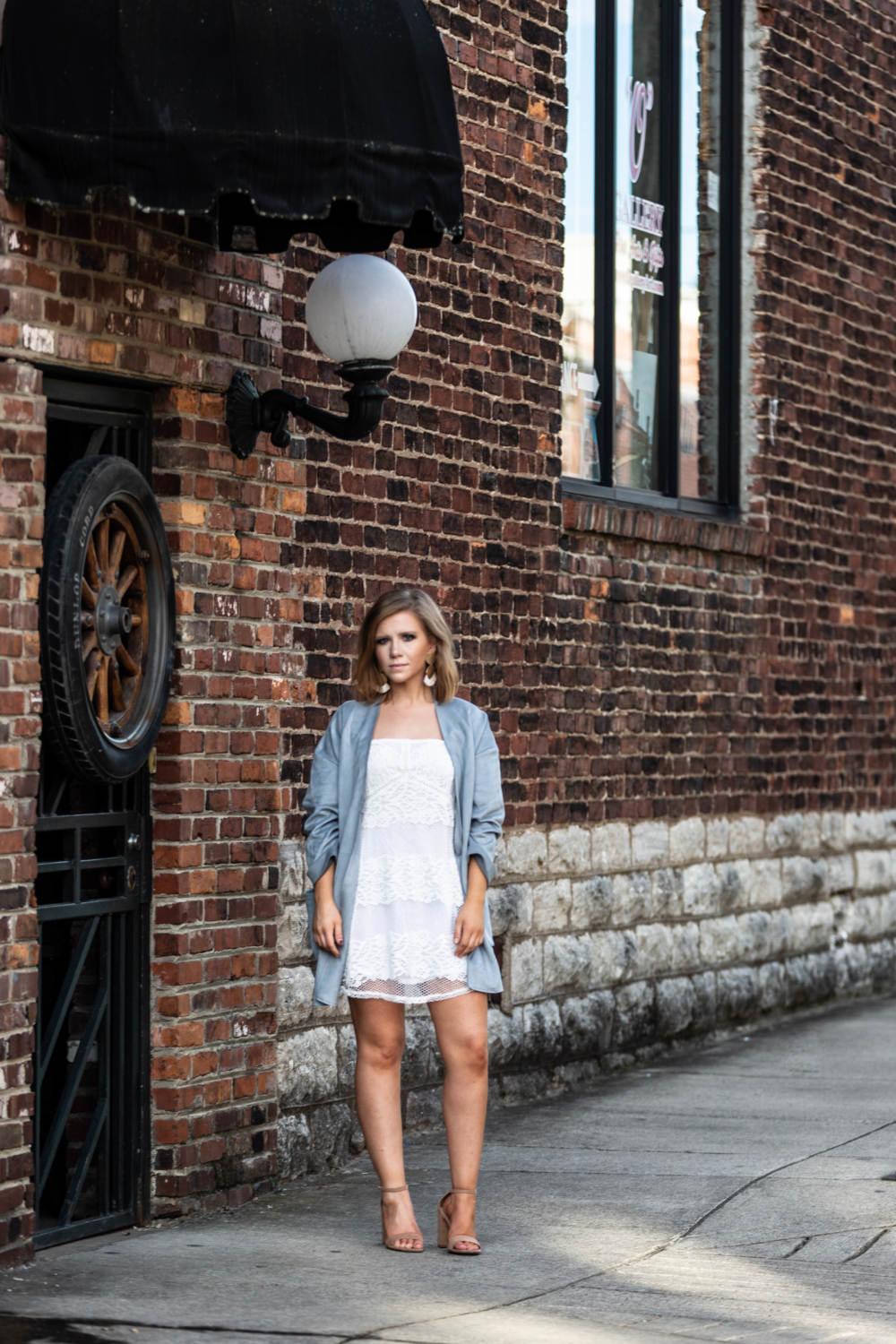 Katie Davis has had one of the most impressive schedules I’ve ever seen; she works 45-50 hours per week at her “9-5” and she will finish out 2019 having played 80 shows. She also has booked and promoted all of her own shows. Most of her gigs have been solo – meaning the gig was just her and either a guitar or keyboard – and you gotta know a lotta songs to play an entire show by yourself. I remember thinking earlier this year – “how on earth does she have time to do it all?” Having never seen a musician be able to handle the work/music balance as gracefully as Katie, I knew I had to have her here to talk to us. I am glad she’s taken some time out of her ambitious schedule to tell us about her story. Katie, thank you for being here and if you would, please introduce yourself to our readers.

My name is Katie Davis, and I am a vocalist, musician, and songwriter living just north of Nashville, TN.

JED: Wait so you moved out of the house in Antioch? I feel like I am just starting to remember this. Did you move to Inglewood?

I moved to Hendersonville!

JED: Oh cool! I feel like I should’ve remembered this or that you’ve already told me this like 4 times now. Anyway, tell us a little bit about your beginnings. How did you get into music, and what made you choose to pursue it?

Growing up as the littlest redhead of six kids with gold-rimmed glasses, my family sang every weekend in churches around the state of Virginia. I had no choice but to learn four part harmony and learn to sacrifice the parts of a song that I wanted to sing so someone else could have a turn. My music teacher Marianne Williams was also my choir director at church (small town perks). She started teaching me piano when I was six and eventually helped me compete in high school scholarship music competitions. My papa (my dad’s dad) played a large part in supporting my music career – even til the day he died. We sang as a family around his hospital bed.

JED: Tell me more about the ways he supported and encouraged you. What did that look like?

As I grew older, I needed his support. He attended as many of my shows as he could, as well as singing harmony with me every time I would visit, or I would sing with him! He also gave me many opportunities to sing at his church, and every Christmas we would sing around the tree.

I sang as the music leader at my church for about thirteen years. Once someone gave me a guitar, I knew I wanted to play other music as well, and quickly began exploring other genres.

JED: Who introduced you to the guitar? How old were you when you started playing it? When you say “other music” do you mean music that wasn’t gospel music?

My church gifted me a guitar at 14. One of my friends played, and he taught me the standard chords to get started! Other music included pop, rock, country, blues, and eventually bluegrass.

So, to answer your original question, I got into music not by choice, but I’m in Nashville pursuing a career in music by choice. I chose this path because of a few men and women who taught me what bluegrass music was when I turned 19. Because of them, my journey took a huge turn.

I was most interested in pop and showtunes. I loved the theatrics of the music, as well as how it allowed me to  be a part of a different world (one very different from my childhood music), and that is when I began performing at my local theater. I met Homegrown Bluegrass at the theater as they were the live band for a Christmas show. That was my first exposure to bluegrass music – and they invited me to one of their rehearsals… the rest is history!

I have so many people to thank for encouraging me to be here, my friend Alana, my band Homegrown Bluegrass, members of my family, and more.

The hardest question for a music lover is which albums or songs do you love most! First and foremost, the most unexpected perhaps, would be Wicked (Original Broadway Cast Recording). I’ll never forget my high school days of belting out those lyrics in the car, and then driving to Nashville, singing at the top of my lungs, “…you’ll never bring me down.” After being a preschool teacher for eight years, being involved in theater, and having five older siblings – I love being dramatic, and musicals have a way of lighting that fire. The albums I would consider influencing my work would have to include So Long So Wrong and Live by Alison Krauss and Union Station, Call Me Crazy by Lee Ann Womack, and Trio (Dolly, Emmylou, and Linda).

JED: The AKUS “So Long So Wrong” album has been referenced so many times in the responses to that question. It really is an amazing musical work of art. Which part of your music career do you enjoy the most – live performance, recording, writing, etc.?

When I’m performing, everything feels right. When I lived in Virginia and traveled with my band Homegrown Bluegrass, I’ll never forget the feeling of knowing that was right where I was supposed to be. Whenever I hit the stage, that’s my favorite part of my journey. My favorite part of my career is when I’m making good music with good people – and when the moment strikes that everything, including harmony, hits perfectly.

Since moving to Nashville, I have met incredible talent; people I didn’t even know existed. David Grier, for starters. Craig Fletcher is another really talented guy. If I had to choose just one more, I would say Julian Pinelli.

JED: I can say with 100% confidence that David Greer is one of the most inventive guitarists there has ever been. Craig’s fiddle playing is silky smooth and he also plays banjo and mandolin. I recently played a gig with Julian and he killed it. I’ve heard a few of the tunes from his new record and he’s really writing some great music. You picked gooduns! Tell us a little bit about your what instrument(s) you play.

My rig moves and changes with the type of gig I am playing. I’ve played upright bass, a bit of mandolin, keys, and guitar at varying gigs, but lately I have been playing my acoustic PRS.

I would use every bit of it to produce and promote the album, and that would sound like a perfect compilation of blues, bluegrass, and good old country music. I want it to be a record that you can’t stop listening to, and a record that resonates with everyone. I’m pretty sure with some of my friends helping me, we could make that happen for less, but I wouldn’t pass up that opportunity.

I would want it to include original work as well as cover songs, and I have quite a few people in mind – friends as well as a select few well known artists. I haven’t worked out all of the details yet, but once I have them nailed down I will share! 🙂

JED: Please do! We’ll be eagerly awaiting. What is your favorite album or recording that you’ve made to date?

My journey hasn’t consisted of an album creation just yet. I’ve been working hard this year, and I’m excited about what might be happening in 2020!

I’m currently working on writing, planning, and trying to stay connected with friends and musicians so I am continually challenged and inspired.

JED: Katie thank you so much for joining us to chat about your story and music. I am really eager to see what the coming year brings you. Don’t be a stranger!

I appreciate everything you have done for me since we met, and I am happy to do whatever I can to help AcoustiCult thrive! Thank you for having me!