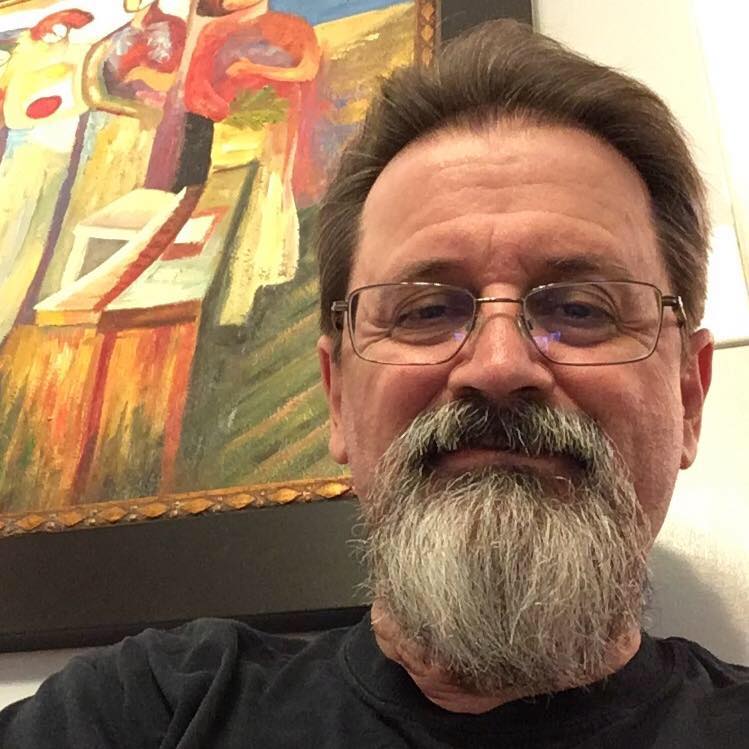 I am really excited to introduce our readers to one of my biggest musical mentors, Bill Nesbitt. My brother and I have played a lot of music with, and under the guidance of, Bill. From countless bluegrass jams in Mountain View Arkansas at the Arkansas Folk Festival or BeanFest, to evening rehearsals for Bill’s gypsy-jazz band Hot Club Arkansas – Bill and I have made some noise 🙂 After my brother and I moved away from central Arkansas and weren’t able to continue playing in HCA, Bill formed a group with my mother and two sisters which he called the Clark Family Trio. He’s inarguably the biggest musical mentor my family has ever had or will ever have. Bill, give the folks a reader’s digest introduction to yourself and what you do.

I started playing guitar in 1965, when I was seven years old. Losing interest quickly (as would be expected from a seven-year-old), I turned the guitar over to my older sister, who strummed chords and sang lead on folk songs by Peter, Paul and Mary, among others, while I stood alongside singing harmony. A few years later, she laid aside the guitar to pursue members of the opposite sex, and I picked it back up, much for the same reason. I soon discovered I had an aptitude for picking out melodies and chord structures by ear, and developed a voracious appetite for learning new music, often devouring entire LPs by such artists as Neil Young, Cat Stevens, Jim Croce, James Taylor, Crosby, Stills and Nash, the Beatles and many others. This ability to pick out songs by ear still serves me well in my teaching. Many times when a student asks to learn a song that I don’t know, I’m able to look it up online, give it a listen, learn it in a matter of minutes, then, in turn, teach it to the student.

Along the way, I discovered the 5-string banjo, bass and mandolin and learned to play each in turn. While earning two bachelor’s degrees (Art and Philosophy) at the University of Central Arkansas, I joined my first Bluegrass band as a mandolinist and vocalist. I would serve in that capacity in that band, as well as several others over the next 30-plus years. During that time I enjoyed a lengthy career as a graphic designer for a large telecom firm in Little Rock, but music was always only a work week away.

My recent interests have included studying the Jazz music of legendary Gypsy guitarist Django Reinhardt, songwriting and soloing on guitar, and accompanying myself as a singer. I also accompany the Clark Family Trio. This has given me the opportunity to play a number of styles on songs that range from folk to pop, jazz, gospel, bluegrass, and soul — much to the delight of audiences around Arkansas.

JED: Bill what would you say are your 5 favorite albums and how do you feel they influence what you do?

(In no particular order)
Chicago – Chicago Transit Authority – Loaded up with talent, creativity and professionalism.
Bluegrass Album Band – Vol. I-VI (I count this entire set as a single project) – Fun to play along with and learn from.
Django Reinhardt – Late 40’s era recordings – Better recorded than the Hot Club stuff, but still acoustic.
Crosby Stills and Nash – I – Tight harmonies and nice songwriting.
Phil Keaggy – What a Day – Virtuoso guitarist and singer, in a Christian context

I enjoy teaching, especially watching a fledgling musician develop into one who not only plays well, but plays well with others.

JED: Who are three musicians that you think the world needs to hear more about?

Tim Crouch — Country fiddler — one of the best in the country, lives and does studio work in Strawberry Arkansas, yet is well known around Nashville.
Ted Ludwig — World class Jazz guitarist in Little Rock, was displaced from New Orleans by Hurricane Katrina and chose to remain in Little Rock.
Tom Richeson — Jazz horn player, has played for lots of notables including Lou Rawls and the Jacksons, works with a church-related organization that carries the Light of the Gospel to the world through Jazz music.

I play my 1985 Santa Cruz Tony Rice signature Brazilian quite a bit, but I also play my $300 Chinese cutaway as well. I have a parts banjo that works well, and my 1981 Randy Wood mandolin is highly functional. My ’38 Swingmaster bass is nice, and I have a Fishman Loudbox acoustic amp that I use on stage.

It would be 100 albums at $1,000 apiece. There would be folk, country, bluegrass, rock, worship, jazz, and it would feature all the friends I’ve made over the years.

JED: HA! That is great! Let me specify that question a bit – Is there any particular “dream scenario” that, if provided a $100k budget, you’d want to spend on one project? Are there specific musicians you’d want to recruit? A specific location you’d like to record in?

I think I’d like to do a recreation of the first Circle album, but with modern musicians like Chris Thile, Noam Pikelny, Winton Marsalis, Yo Yo Ma, Victor Wooten, maybe some Gypsy Jazz guys like Stochelo Rosenberg and Bireli Lagrene… people who can cross over styles and are open-minded.

I’m very proud of my collection of jam tracks that I’ve done for banjo, mandolin and flatpick guitar. I count it all as a single ongoing project.

JED: Well Bill I greatly appreciate you taking some time to tell me more about your story and what is currently going on in your world. Where can we find you online?