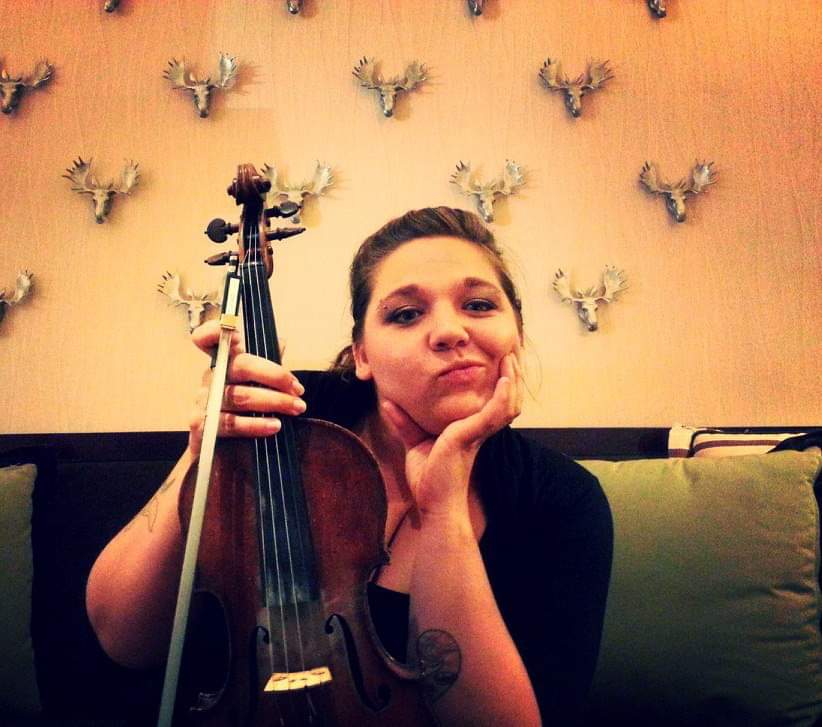 Aarun Carter is no stranger to awards and accolades for her fiddling skills; in addition to her 6 Colorado State champion titles, Aarun has won state titles in Oregon, Wyoming, Washington, and Arkansas (traditional old time state champion). She has also been awarded the title of 2011 National Young Adult Champion at the National Old Time Fiddlers Contest in Weiser, Idaho. For those that might not be familiar with the Weiser contest, think the Grammys but for fiddle players. Aarun, I’m really glad you’re with us today. Please introduce yourself to our readers.

My name is Aarun Carter and I play the fiddle. I currently live in Portland, Oregon where I teach, and play shows regularly. I make my living as a musician.

I started playing when I was 2 years old, or as my mother would say, “18 months.” My mom is a Suzuki violin/fiddle teacher who now lives in Vancouver, WA. She said, when I was young, I would always try to grab her fiddle to play with it, so she got me a plastic violin that had the Muppets on it. I quickly became frustrated that it wouldn’t “play”, so she put real strings on it, and got me a real bow. I think the rest is history. I really can’t imagine life without my fiddle now.

JED: Wow! That is young! So are you originally from Portland? Where did you grow up?

I grew up in Denver, CO. For high school, I went to Denver School of the Arts.

JED: Denver School of the Arts is a magnet school right?

JED: Can you tell me a little bit about how it was different from a traditional high school? I think this is a neat part of your story.

Well, it was grades 6-12. I started in 9th grade and you have to audition to get in. I majored in orchestra, so I had an hour and a half of orchestra every day. If we had a performance, we would often rehearse before and after school as well.

JED: That is really neat. So it wasn’t drastically different than a traditional high school, you just spent more of your school time focused on music studies, correct?

Well, it was pretty different as far as the students went. Our school never had any fights and bullying was rare. Everyone accepted each other’s differences.

That sounds like a great environment to grow up in. Tell us a little bit about your musical influences. What are your favorite 5 albums, and do they influence your work? If so, in what ways?

Well, that is a tough one, but I’ll take a stab at it.

My #1 most influential fiddle album was one Wes Westmoreland put out a while back. It was just recordings of him playing in various contests and jams. It was called Wes Westmoreland III A Collection of Contest and Jam Session Tunes. I used to ride the public bus an hour each way to school, and I would just listen to that thing on repeat. I always try to include the spirit of Wes in my playing.

Eric Clapton’s Unplugged is one that I believe steered me in the direction of the blues.

It’s hard to boil down exactly which John Mayer album is my favorite, but Where the Light Is is a good representation of what he does. I’ve always been drawn to his music.

Mark O’Connor’s Heroes is one I grew up on. I know that album front to back. Fun fact: my little brother was born to that album.

A Texas Jam Session is a good one because it includes many of the fiddlers that I hold in high regard. It included Benny Thomasson, Texas Shorty, Terry Morris, and Mark O’Connor. The general “spirit” of the album is amazing. Hearing those guys just jamming, heckling, and hanging out is the best.

One artist that had an impact on me in college was Casey Driessen. I discovered his album Oog shortly before 3D came out. He gave me the inspiration to not be afraid to create, and be different.

I could go on forever, but there’s a start on the spectrum.

JED: That is a really diverse lineup. I’ve found it interesting how many times bluegrass/Americana/new acoustic/swing players have referenced a John Mayer album as influential to their playing. I wouldn’t have expected for so many musicians in a totally different genre of music to note him in their top 5. Great music has no genre-constraints though. Which part of your music career do you enjoy the most – live performance, recording, writing, etc.?

I think live performance is my favorite. Feeding off the collective energy in the room is one of the best feelings! Recording is really fun too, especially when you are working with a producer that you have good “chemistry” with.

It depends on the gig. For acoustic shows, I use a fiddle that was made in 1880. I’ve had it since high school. For top 40 country gigs, rock, and blues gigs, I use a black Glasser 5 string carbon fiber fiddle. I also use a Glasser carbon fiber bow. I have a Fishman loud box amp and a pedal board. On my pedal board I have a vintage Barcus-Berry pre-amp, Boss distortion, tuner, harmonizer, and chorus. I also have a MXR digital delay, volume pedal and a boost pedal.

I think I would do a “Heroes” type album and bring in my idols. It would be a dream come true to collaborate that way. It would have a mix of blues, country, Texas style fiddling, Jazz/swing, and bluegrass.

I’d love to have Tim Crouch, Wes Westmoreland, Tom & Alita Weisgerber, and Anthony Mature to name a few. I would have Luke Price produce it. I would definitely bring in Stephen Schauer to do the audio side of things, and we all know there would definitely be tacos involved.

JED: I love hearing people reference Tim – makes me proud to be an Arkie! What is your favorite album or recording so far that you’ve made?

I have done a lot of freelance studio gigs, but I currently have one album of my own. Deep End Sessions Vol. 1 was such a great experience! If you haven’t checked out the series, you definitely should!

JED: I’ll check that out! What are you currently working on?

Right now, I’ve been funneling a lot of energy in to teaching, and my kid fiddle group, “Fiddlocity”. It is so rewarding to pass on the tradition to a younger generation. I play regularly with the Kurt Van Meter Band, and that has opened up a ton of opportunities for me! I even got to sing with Garth Brooks when he came to Oregon! I play a lot of freelance gigs and studio work. I’m currently in the process of making another single with Todd Hoffman (Gold Rush) and that should be out soon. You can check out the video we did for “Pieces” on YouTube. I also play with Joni Harms and the newest addition to my list of projects includes Soul Kitchen Oregon. We have a Hawaiian tour coming up soon.

JED: Well Aarun you’ve got a lot of really cool stuff in the works. Thanks for taking some time outta your busy schedule to tell us whats going on in your world! We’ll catch ya on down the road.