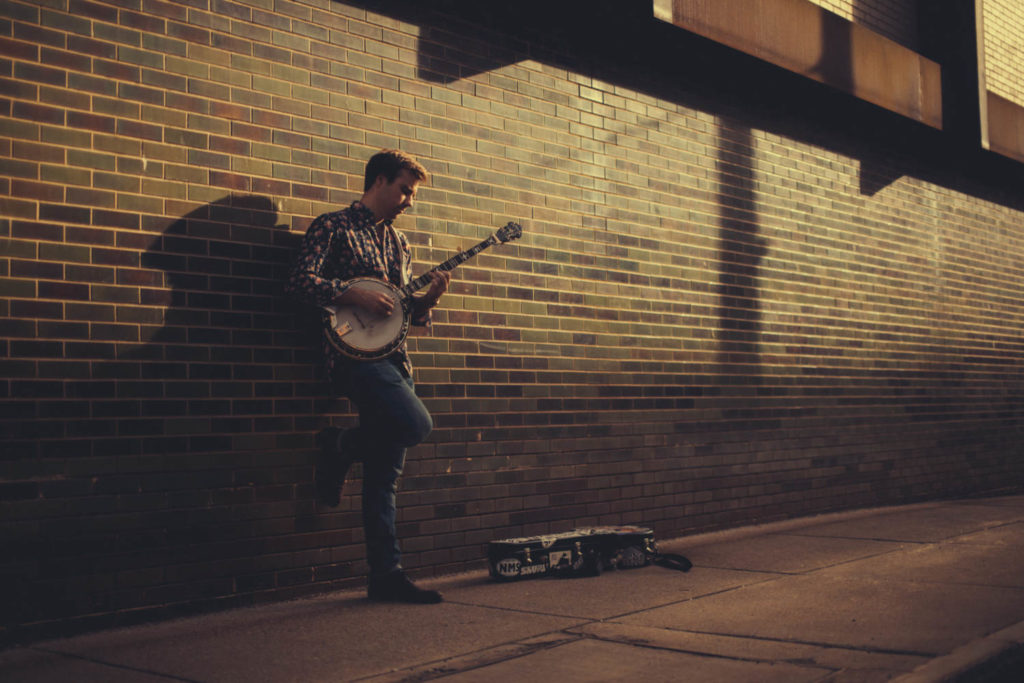 I am really excited to introduce you all to my buddy Gregg. He is the mastermind behind the largest collaborative bluegrass project ever recorded. This project took over two and a half years from start to finish and I’m eager for him to tell us more about it. Gregg, tell the folks a little but about yourself and your project.

Well, my name is Gregg Welty. I guess you could say I am a bluegrass musician! I play mostly banjo, but dabble in guitar and upright bass. I’ve played with various bands in the past either as a member or fill-in – Blue Mafia, South 79, etc. But, these days I’ve been spending most of my time working in the studio. I put out a record called “Community” at the end of 2018 that featured 50 bluegrass artists on it and is the largest collaborative bluegrass album ever recorded! I enjoy writing music and arrangements, working in my recording studio, getting people together to record and perform that may not get the opportunity to do so otherwise, and put good music out into the world! I’d say I am a little different than most bluegrass musicians out there because I don’t play in a band, or really gig much at all these days, I just enjoy making music and sharing it for the world to experience

I grew up in a “bluegrass household,” I guess you could say. My dad is the 1993 (and 2019!) Winfield National Banjo Champion, so the banjo was always around. I actually hated it for a LONG time. You know, the banjo is loud and can be…sort of obnoxious. I grew up taking piano and singing lessons. Then, when I was around 10, I wanted to learn how to play electric guitar so that I could play in a rock band. My dad was the only “guitar player” that I knew, so I asked him to show me a few things. It was kinda funny hearing Tony Rice licks on a Les Paul. Anyway, learning some bluegrass guitar (even if it was on slinky electric guitar strings) really showed me how complicated and interesting bluegrass music was. It wasn’t long after that that my dad bought me a banjo for my birthday. ‘Rest is history I guess! These days my dad and I will even compete against each other in banjo contests, which is fun. He has been kicking my butt here lately, he even won Winfield again this year and I didn’t even make the finals!

JED: Man that is super super rare. In the bluegrass community having a parent that plays is somewhat common, but to have one that competes against you in contests is unheard of. Did your Dad help coach you through contests growing up or was he more “hands off?”

It definitely raises some eyebrows at contests! Yeah, I mean, I’d say he is pretty hands off overall. We have much different playing styles and even like to listen to different types of bluegrass music. He really likes the newgrass instrumental type stuff, whereas I like more traditional bluegrass. But, with that said, he definitely showed me some tips and tricks to do well in contests over the years. I have even played some of his arrangements in contests before –  Fun to beat him playing his own songs!

JED: HA! That is hilarious. Few can make such a claim! What are your favorite 5 albums, and do they influence your work? If so, in what ways?

Phew. Difficult to answer but 5 that immediately come to mind are;

The Livewire album was practically the soundtrack of my childhood. Scott Vestal is my all-time favorite banjo player, and my dad’s too. That record is the epitome of taste, timing, tone, arrangement, song-choice. It is just everything. I’ve cut a song off that record on each of my albums. Cadillac Sky was the band that sort of got me from my rock-n-roll youth to bluegrass. I guess you could say it was the bridge that opened my ears (eyes?) to the more traditional bluegrass sound. That Ricky Skaggs album was another one from my childhood that I remember. Jim Mills is just awesome. The LRB and Boxcar records are ones that I became obsessed with in college and just have had on repeat for years.

These days I pretty much only do recording! But, honestly, my favorite is a good jam. I love to go to SPBGMA or Galax or one of the other great jamming festivals and stay up until 5AM just playing bluegrass music. No stage, microphones, headphones – it is just the best part of this music.

JED: The jam-culture of bluegrass music is what drew me to it initially. It is truly like nothing else. You brought up a good point; it doesn’t require anything except the instrument and the player to make it happen. What are three musicians today do you think are underrated?

Geez, there are so many. Josh Hicks is my one of my favorite bluegrass musicians and he doesn’t play for anyone or gig out very often. Only people in the pretty small community of 20-somethings playing traditional bluegrass would’ve ever heard of him, but he is incredible. Other ones that come to mind are Andy Lowe and Doug Young. Andy plays for the Deer Creek Boys and just has amazing tone and timing. I look up to him a lot. And Doug is one of my best friends in the world. He hasn’t been playing bluegrass but maybe 7 or 8 years, but he too has a long history of playing electric guitar. He has a super creative style and great ear. Super underrated player.

I am unbelievably lucky to have the instruments and gear that I do. I have 2 Wayne Henderson dreadnought guitars – #706 is a Brazilian Rosewood shadetop D28 style and #758 is a curly mahogany D42 style. I also have #78 Wayne Henderson F5 Master Model mandolin. I’ve got 2 basses – a 1945 Kay and a 1875 German carved orchestral bass. And then for banjos I generally use either my 1989 Greg Rich Era Gibson Rb3 with a Huber HR40 tone ring or my 1930 Gibson TB3 9550-30 that was once owned by Noam Pikelny. That older one was also once owned by David Carroll when he played with Darrell Webb. I’m also currently borrowing a 1934 MB11 conversion from my close friend Jon Finder. That ugly mother of pearl banjo sure sounds great and I used it a lot on “Community.”

Community 2.0! I’d hire 100 of my favorite bluegrass musicians and get them all together to just put out a great album. Then I’d spend the rest on having it mass-produced and I’d give the copies away for free to anyone who wanted to have a copy. If I didn’t have to try and re-coup the cost of making albums, I’d give them all away for free!

JED: That is a very generous mentality to have with something like that. Involving that many people in the recording of a project would definitely utilize a lot of that budget. Would you want to record the album all at the same place or would you want to have mobile studios contribute to it in their own time?

Truthfully, I don’t have a super strong preference! I think the most fun part of recording is getting to hang out in the studio and enjoy the process with other musicians. But, with that said, when people are recording for a project of mine I always bias their playing in some way. You just can’t avoid that. You know, saying “I like that, but I don’t like that.” Some of the coolest licks/breaks/etc. on “Community” are things that the artists did remotely and sent to me. Basically, stuff I didn’t get to hear until it was recorded and finished. It’s fun to hear what other artists add to a song, even if it’s different from the vision I had beforehand. That’s why it’s a collaboration!

You probably guessed it already, but I am incredibly proud of my latest project “Community.” It features so many of my closest musician friends, as well as several heroes that I never dreamed would ever be willing to play or sing on a record of mine. For example, I’ve always loved the Ola Belle Reed tune, “I’ve Endured.” Never in a million years would I have thought that I could get Shawn Lane of Blue Highway to sing it for me. There are plenty of similar examples on that record, but for space I’ll leave it at that. Check it out on Spotify or itunes under “Gregg Welty – Community” or at greggwelty.com if you’d like a copy on CD or vinyl!

I may or may not be in the early stages of a special project coming sometime in the next couple years..

JED: Aw c’mon Gregg you can’t leave me hangin’ like that. Give me a decent teaser 😛

That’s all you get for now! But, man, I can’t thank you enough for talking to me. I hope this platform really takes off. I think it’s awesome that you’re spreading the word about all these amazing under-recognized players and influencers…oh, and nobodies like me too!

JED: Ha! Man thank you for the well-wishes. You’re far from a nobody and we really appreciate you joining us to chat for a bit. Until Community Vol. 2, we’ll see ya next time.